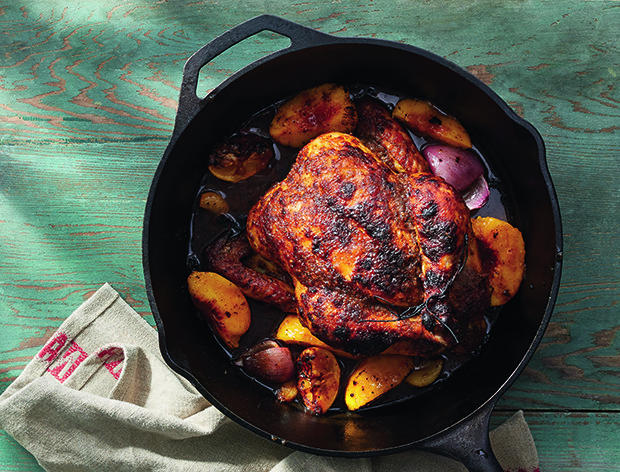 Nature Gives You Peaches, A Cookbook Highlights How To Use Them

Chef Belinda Smith-Sullivan lives in Edgefield County in South Carolina, home to the "Peach Capital of the World," at least according to one city's welcome sign.

"You might think Georgia, but it’s really South Carolina," she said in a whisper, so as not to offend her neighbors to the south.

Perhaps it’s fitting that her latest cookbook, "Just Peachy," features all things related to nature’s candy. Smith, also a food writer and spice blends entrepreneur, said like its abundant orchards, peaches are baked into the culture of South Carolina, though her introduction to them originated elsewhere.

With summers spent in Mississippi on her grandparents’ farm, she watched her grandmother can and preserve peaches; her grandfather made peach brandy.

"That love that I developed for peaches just never left me," she said. Belinda Smith-Sullivan sits on her porch with her dog. Photo courtesy of Trina Kaye

While Smith-Sullivan has recreated recipes from her mother and grandmother, they never quite turn out the same way. She jokes that maybe it’s psychological, because her peach desserts — she self-reports — are quite good.

"But when I close my eyes and I think about my mother and my grandmother’s peach pies and peach cobblers, there’s just something there that’s missing for me," she said.

Growers in the south begin picking peaches in mid-May. There, the season generally runs through mid-September. Northern states have to wait a little bit longer. Yes, peaches do grow in Wisconsin and in fact in every state except Hawaii and Alaska. Peaches do need warm weather to grow well, but they also require a certain number of freezing days for the peaches to develop good flavor.

There are three basic varieties of peaches, Smith-Sullivan explained. Early peaches are called clingstones, which are good for eating and canning. Mid-season peaches, called semi-freestones, pull away from the stone more easily and are good for baking and pickling. Late season peaches, or freestones, are best for grilling.

"They’re really hardy; they hold up to the grilling process," she said.

While fresh peaches might be preferable, that’s not always an option. Smith-Sullivan said frozen peaches are the best substitute for fresh ones.

"Canned peaches are very good in peach pies, but if it’s something I’m going to cook on the stove or bake I prefer to use the frozen peaches," she said.

She’ll collect a few bushels of peaches near the end of the season and spend a day or two freezing them. Some she peels, slices or chops. Then, she spreads them out on a parchment-lined sheet pan and freezes them for about four hours. After that, she puts them in vacuum-sealed bags.

"The reason I freeze them first before I bag them is that they’re loose and you can just use as many or as few as you want," she said.

While one entire chapter in her book is devoated to desserts, Smith-Sullivan said there are plenty of savory options that pair well with peaches, even a Spinach Peach Omelet. Because the spinach is somewhat bitter, peaches help to round out the flavor.

Peaches and pork chops, though? "It's almost like it's a marriage made in heaven," she said. 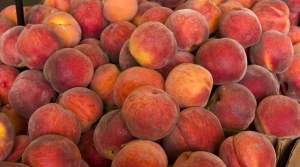 Peach season is now getting underway, and there's plenty of ways to enjoy this great summer fruit. Our guest chef shares some cooking tips and favorite recipes she says are just peachy.