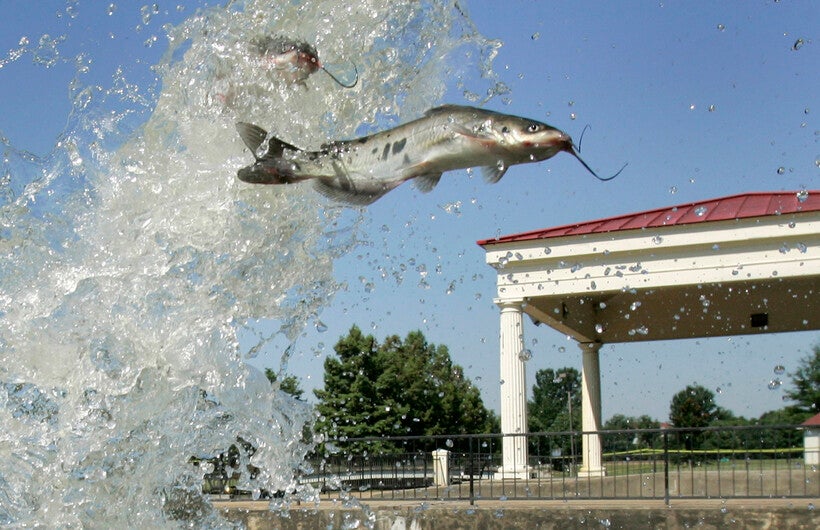 In this July 16, 2008, file photo catfish are released into a pond at a Little Rock, Ark. park. Danny Johnston/AP Photo

Natural Resources Board Signs Off On Catfish Seasons, Bag Limits

People Will Not Be Able To Use Gear While Hand-Fishing Or 'Noodling'
By Danielle Kaeding
Share:

The Wisconsin Natural Resources Board has approved a permanent rule overseeing bow- and hand-fishing seasons for catfish.

The rule change doesn't include size limits except in waters with existing hook-and-line size restrictions. The regulations set a daily bag limit of five for channel catfish and one for flathead catfish. Bow and crossbow seasons would be nonstop in most cases. But hand-fishing, otherwise known as "noodling," would run from June 1 to  Aug. 31 to overlap with their spawning season.

Wisconsin is one of the top producers of trophy flathead catfish, said fisheries biologist Bradd Sims with the Wisconsin Department Natural Resources. He said the agency had concerns about overharvesting catfish when they’re most vulnerable, such as in overwintering and spawning areas. Sims said they often return to the same areas year after year.

"Once found, it makes them easy to target," he said.

Sims said catfish are particularly vulnerable to hand-fishing when people use scuba gear.

"It would be really easy to decimate local populations along certain stretches of river and even entire rivers during these overwintering periods," he said.

"People would only be able to take catfish with their hands; so, no snorkel gear, scuba gear, gaffes, hooks — anything like that," she said.

"The catfish is a valued game fish in Wisconsin, and, as such, we feel that the season and bag limits identified in this rule are necessary," he said. "Bowfishing by its very nature does not allow for catch and release of the target fish nor does it require a hungry fish to be lured in by the promise of a tasty meal."

Dr. Fred Prehn, chair of the Natural Resources Board, asked the agency to bring the matter back to the board if the DNR sees a reduction in the catfish population due to hand- and bow-fishing.