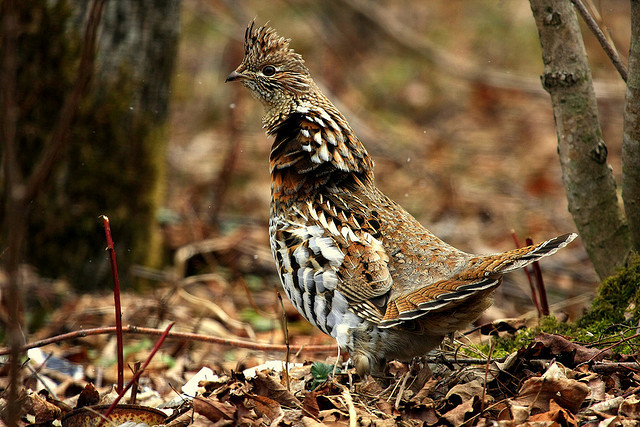 The Wisconsin Natural Resources Board has approved a 10-year plan for ruffed grouse management in the state. The move follows concerns over the bird’s decline.

The number of ruffed grouse harvested in the state has dropped by more than a third since 2016 to roughly 173,347 birds last year, representing the lowest harvest in more than three decades.

Concerns have centered around habitat decline and the impact of West Nile Virus on ruffed grouse. A 2018 study found 29 percent of the birds sampled in Wisconsin had been exposed to it.

The plan aims to promote young forest habitat that is most suitable for ruffed grouse, noting many of the state’s forests are roughly 100-years old. The plan recommends developing focal areas for habitat management within the next two years.

"By creating the focal areas, we know where we’re going to get — we’re going to maximize our benefits for ruffed grouse," said Mark Witecha, upland wildlife ecologist for the Wisconsin DNR.

As forested acres in Wisconsin has grown, the state has lost more than 1.3 million acres of forest that’s under 20 years old since 1983, according to the plan.

"While we emphasize that habitat management for this species is crucial — which it is, no doubt about it — little of that can be accomplished without a strong, vibrant forest industry," said Gary Zimmer, a former board member and member of the ruffed grouse management plan team.

The plan also creates new ruffed grouse management zones and shortens the hunting season in the northern half of the state. A recent survey of 1,694 people showed 67 percent support ending the season early — on the Sunday nearest Jan. 6 instead of Jan. 31.

The board also approved putting in place new hunting zones and harvest quotas for black bear management. The changes are part of a new 10-year plan that the board approved earlier this year.

Scott Karel, wildlife regulation policy specialist with the DNR, said the rule implements several aspects of the plan. He said that includes changing the number of bear management zones from four to six.

"We split Zone C into three zones to better kind of follow habitat in the areas and allow more specific zone or population setting within those smaller zones rather than large Zone C that took up essentially the southern half of the state," said Karel.

The agency will also shift away from numeric goals for bear populations and harvest quotas in each zone.

"It’s a more flexible approach than say we have to take X amount of bear every year. It could be more. It could be less based on a variety of models," he said. "It’s similar to what Minnesota does."

Population goals would be based on a variety of factors including trends in bear health, damage and complaints.

The Wisconsin Conservation Congress said it supported implementing changes identified under the plan, noting it also removes the three-day waiting period for bear licenses sold during the bear season. There were 3,835 bears harvested during the 2019 season.

The board also extended an emergency rule that updates commercial fishing regulations on Lake Superior. The rule seeks to provide more equity in allocating lake trout tags among the two management areas for Wisconsin waters of the lake.

The rule does not include an experimental October whitefish season for state commercial fishers due to concerns it would overlap with lake trout and whitefish spawning. However, northern Wisconsin tribes did harvest whitefish during October 2019 with no significant impacts to the fishery.

The board also voted to table a permanent rule that would confirm the DNR’s side of the 10-year Lake Superior Fishing Agreement with the Red Cliff and Bad River Bands of Lake Superior Chippewa. Board members want tribes to sign off on language that provides more specifics on biological benchmarks for the fishery.