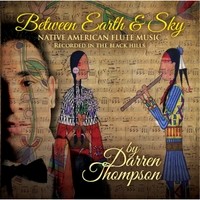 Darren Thompson is an award winning Native American flute player, activist and educator from the Lac du Flambeau Ojibwe Reservation in Northern Wisconsin who proudly represents his Native culture, while representing the great state of Wisconsin, all across this country.  This album is in a word 'transformative" as it draws the listener to a pastoral place of peace.  Added support instruments would only compremise this wonderfully recorded solo album: Between Earth & Sky, Drumhop Records, 2015