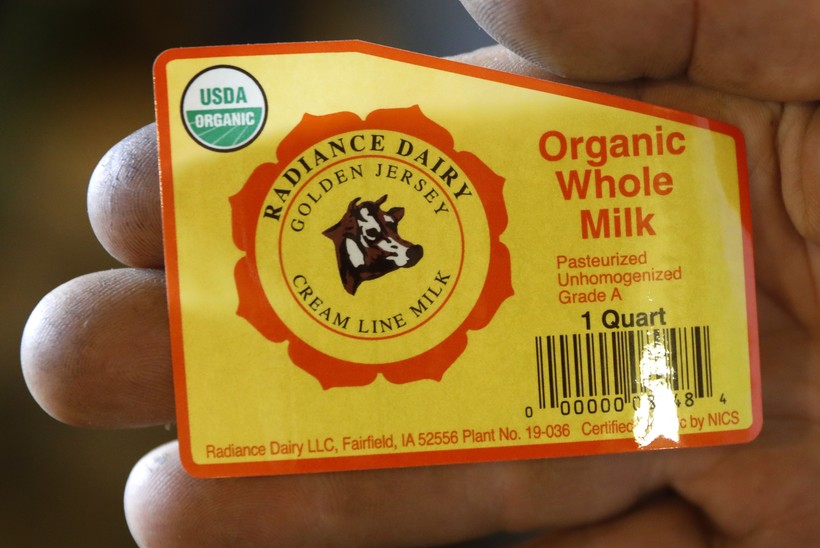 In this May 8, 2018, photo, organic dairy farmer Francis Thicke holds the label for milk produced on his farm in Fairfield, Iowa. Small family operated organic dairy farms with cows freely grazing are going out of business while large confined animal operations with thousands of animals are expanding. AP Photo/Charlie Neibergall

Nation's Organic Farmers Envision What Industry Will Look Like In 2051

Farmers from across the country gathered at a recent conference in La Crosse to plan out what the organic industry might look like in 2051.

Rockamann lead a discussion about ways to bring more diversity into organic agriculture.

There were other planning topics, ranging from organic farming production, economics and climate change.

David Abazs, an organic farmer from northern Minnesota, led a discussion about how organic farming can help revitalize communities.

"What the future of farming looks like will determine the future of rural communities. If we’re looking at more diversified family farms, that fills the schools. It creates that network we once had that we could have again in this new farming system," he said.

Abazs said more women are entering organic farming right now and as the demographics of farming change, it presents both challenges and opportunities.

"The face (of organic farming) will be changing. It’s going to be diverse and the next generation is coming up and a lot of them are looking toward new ways of doing things. We’re in a great transformation in agriculture," he said.

Wisconsin is expected to continue to be a leader in organic farming. The most recent figures from the Pew Research Center show Wisconsin trails only California in state’s that have the most organic farms.

"We certainly have the topography and the mindset. Vernon County (in southwestern Wisconsin) is one of the largest organic producing counties in the nation and also home of Organic Valley, which is a $1 billion (a year) cooperative. They’ve built the infrastructure in the state," said Darin Von Ruden, the president of the Wisconsin Farmers Union and owner of an organic dairy farm in Westby.

"We're seeing other parts of the state too, where the mindset of the local communities is, 'Let's try to be more thoughtful about our production practices.' A lot of times that boils down to the organic side," he said.

While organic farming has been growing in popularity, it still pales in comparison to the amount of conventional agriculture in the U.S.

"We need more public and private investment because this movement has been built on the backs of independent farmers and non-profit organizations who are operating on shoestring budgets for too long," Rockamann said. "We need big money to get this agricultural system the way it needs to be."