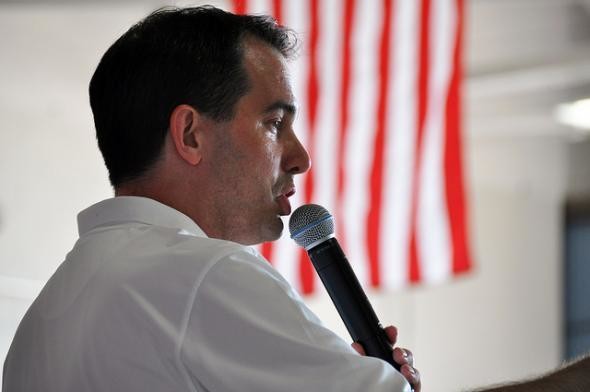 National media has dubbed Gov. Scott Walker the star of the Iowa Freedom Summit, a political event in Des Moines that attracted more than a dozen other Republicans who are exploring presidential runs this weekend.

In reaction to Walker's speech to a crowd of conservative activists, Bloomberg proclaimed, “Scott Walker Takes Center Stage.” Slate's John Dickerson called him the winner of the forum in “Wisconsin’s Scott Walker outshines the competition in Iowa,” and Buzzfeed’s McKay Coppins even referred to the governor as a “breakout star.”

Matthew DeFour, state government reporter for the Wisconsin State Journal, said the response to Walker likely stems from the fact that he was initially underestimated when compared to the other possible candidates.

“A lot of the commentary that I’m reading pegs Scott Walker as the big winner. That has a lot to do with expectations,” said DeFour said.

DeFour explained that critics of Walker’s public speaking in the past have said that he lacks the charisma to attract a national audience and compete with others seeking the presidential nomination. However, during his speech on Saturday, DeFour said that Walker “really had the audience on the edge of their seat.”

The governor arrived with his shirtsleeves rolled up and paced the stage as the audience cheered. His descriptions of the death threats that he received during his recall election elicited gasps from the audience, and the speech ended in a standing ovation.

“This speech was very much tailored to introducing himself to these people,” said DeFour.

The governor’s time in office has attracted some national attention, but he is still largely unknown to people outside of Wisconsin. Telling his story of making significant legislative change and surviving a recall election will be part of his bid as he prepares for a likely presidential run.

“I think that sends a powerful message to Republicans in (Washington, D.C.) and around the country: If you’re not afraid to go big and go bold, you can actually get results,” Walker said, during his speech on Saturday.

Those at the summit largely spoke to the right wing of the Republican Party. Contenders for the nomination who are considered more moderate, like Jeb Bush, Mitt Romney and Marco Rubio, weren't in attendance.

The governor’s appearance on Saturday has provided more fodder for those tracking his potential run for president. Moreover, his schedule looks like the schedule of a person who will likely seek the Republican nomination. In addition to the Freedom Summit on Saturday, Walker headed to California to attend an event sponsored by a group affiliated with industrialists David and Charles Koch. Walker also plans to address a Republican Party gathering in New Hampshire in March.

C-SPAN recorded Walker's speech at the forum on video. Watch the speech: