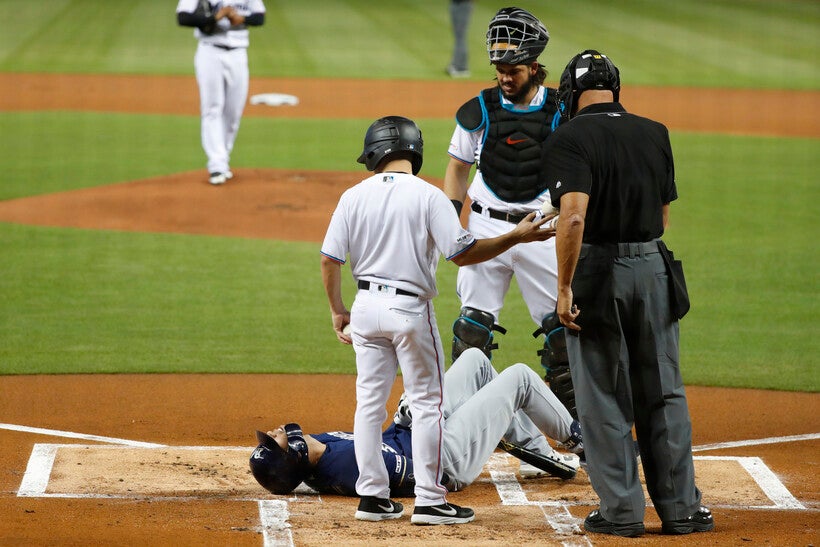 Milwaukee Brewers' Christian Yelich (22) lies on the ground after an injury during an at-bat, as Miami Marlins catcher Jorge Alfaro, rear, home plate umpire Kerwin Danley and a bat boy stand next to him during the first inning of a baseball game, Tuesday, Sept. 10, 2019, in Miami. Yelich broke his right kneecap on a foul ball and will miss the rest of the regular season. Wilfredo Lee/AP Photo

In A Must-Win Situation, The Brewers Lose Star Christian Yelich

2018 MVP Out With A Fractured Kneecap
By Brady Carlson
Share:

The team said Yelich will be out for the rest of the regular season, but hasn't said whether he might be able to return if the Brewers make the playoffs.

Brewers general manager David Stearns said after Tuesday’s game against the Miami Marlins that Yelich would fly back to Milwaukee for testing and diagnostic imaging Wednesday.

"First and foremost, we feel awful for Christian," Stearns said. "This is a guy that’s carried us in a number of ways over the last two years. He could’ve been two and a half weeks away from a repeat Most Valuable Player Award. That’s where our thoughts go first."

Yelich hit .329 for the season, with 44 home runs, 97 RBIs and 30 stolen bases, at a time when the Brewers are two games behind Chicago for the second wildcard spot.

Outfielder Lorenzo Cain said it was "tough, tough news, as a whole, not only for him but for everybody involved. It sucks."

And, he said, it means the team will have to find ways to score runs without its top offensive player.

"It’s hard to make up for that kind of production," Cain said. "I don’t know. We’ve just got to figure something out. We’ve got to pull together as a team, find a way to continue to play great ball."

"We’ve been through this before as an organization," Stearns said. "Two years ago, almost to the day, we lost Jimmy Nelson to a similarly freak injury, and we competed at a very high level for the remainder of that season. And I expect our team to compete at a similarly high level going forward." 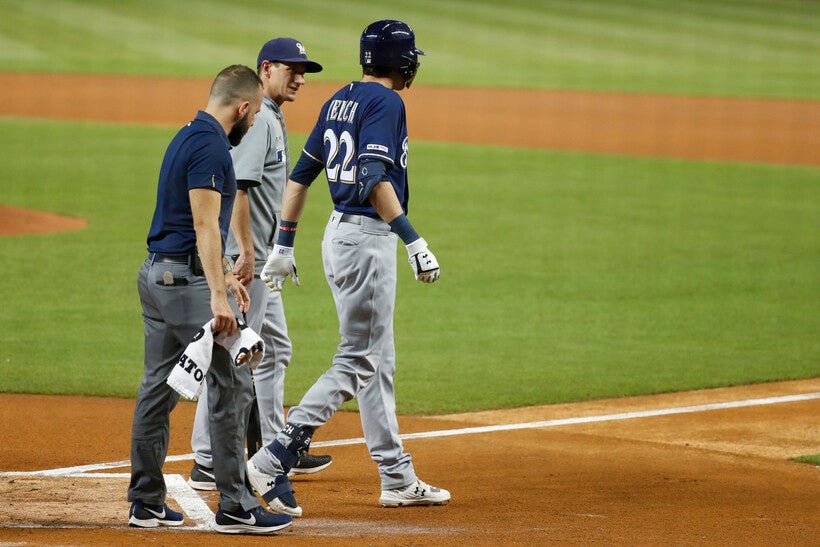 Jennifer Earl-Boehm, associate professor in the athletic training program at the University of Wisconsin-Milwaukee's College of Health Sciences, said the particular injury appears to be rare in baseball.

"Bones are pretty strong and pretty tough," she said. "For that amount of force to cause a fracture is pretty significant."

While it's not clear yet if Yelich will require surgery, Earl-Boehm said that wouldn't necessarily mean a longer recovery time.

"There's a lot of movement that's going to happen and a lot of stress that's going to across that fracture site," she said. "Sometimes fractures heal a little quicker if you do have them pinned or have surgery to hold it together, rather than having to protect it with a brace and crutches for a really long period of time."

That movement on the knee, she said, could make recovery uncomfortable for the outfielder.

"Your quadriceps are a huge, strong muscle group," she said. "They're going to (be) pulling on that patella with every step, and that's going to cause some discomfort. The ability to get to a pain-free state and be able to play at peak performance is going to be his goal regardless of the route they take for treatment."

And Brewers fans will watch to see whether Yelich’s teammates can catch the Chicago Cubs and secure a spot in the playoffs while he recovers.

"He’ll bounce back," Cain said. "We’ll try to find a way to go and get it done without him."