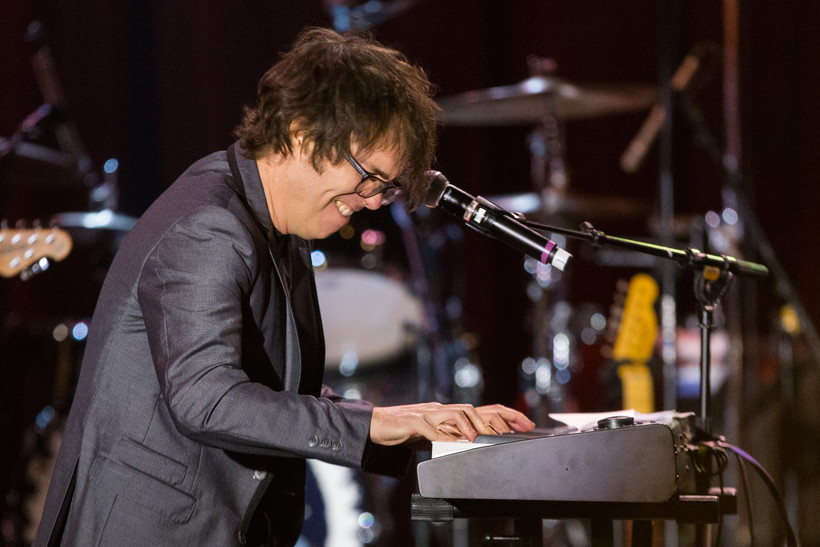 From The Brutal Piano Rock Of Ben Folds Five To 'Rockin’ The Suburbs'
By Doug Gordon
Share:

Singer, songwriter and pianist Ben Folds has enjoyed a long, successful career as an unconventional icon. He’s created genre-bending music throughout his solo career and as the frontman of the trio Ben Folds Five. He reflects on his life and work in a memoir called "A Dream About Lightning Bugs: A Life of Music and Cheap Lessons."

Folds formed Ben Folds Five with Robert Sledge on bass and Darren Jessee on drums in 1993. In his book, Folds describes the band's style of musical arrangement as "brutish."

"The idea was to not serve the song because the songs had had lives before Ben Folds Five," he told WPR's "BETA." "And they hadn’t been successful. I’d been playing those in little clubs by myself. I’d made demo tapes for years. It had all more or less been rejected. And we just kind of stumbled upon the power of beating the songs up. I think in the book, I use the image of the suitcase commercial where the monkeys are beating up the suitcases. If they can stand that, then they’re good suitcases. And that was their quality control."

"We turned the vocal down ... the distorted bass was louder sometimes than the vocals, and cymbals were bashing, and I was playing wrong notes. It was really pretty raucous stuff. But in the middle of it is a song that could be like a Broadway hit," Folds said. "So the idea was just like let’s put that kid in a rough neighborhood, let him get beat up some."

In his book, Folds writes that he knew of no precedent for a full-time, guitarless piano rock trio in the mainstream when Ben Folds Five started.

"We were the piano band that rocked," he said, adding that part of the book is spent exploring piano rock prior to Ben Folds Five. "Elton John did that '17-11-70' album, which wasn’t intended to be an album; it was just a live show ... God, I think it brings out the incredible pianist in Elton. That’s some of his best piano playing."

One of the things that Folds and his bandmates Sledge and Jessee learned during the early days was that if something didn't make sense, it could be worth exploring because it meant nobody else was doing it.

"We just came to feel that anything that got resistance was, you know, advance until apprehended," Folds said. "Even a band like Queen had broken a lot of rules but did it in a way where you just really stressed the obvious. You know, you got a great singer. Put that singer straight up front. Hell, overdub them, make 15 of them. Massive harmonies. Now really exaggerate what they did. By the time we came along, you really needed to be looking at other things and exaggerating other things. You don’t want to do what your parents did."

Folds also shared his theory about a sense of discovery all songs should have.

"A song or a performance should have a shared sense, even if it’s an illusion, of discovery between the audience and the singer," he said. "The singer ought to feel like the third chorus ought to feel like something has been discovered. It can’t be the same exact person, in my opinion. If you keep writing the same s--- over and over again, even if you know you’re really good at it, you lose that sense of discovery."

"Rockin’ the Suburbs" is the title track from Folds' 2001 debut album as a solo artist. The song was inspired by the state of the culture at that time.

"I realized that there was a whole decade of radio formats that were just dedicated 24/7 to white middle-class anger. That’s what that stuff was, modern rock radio was white middle-class anger. It was screaming all the time. Everything was bad, everything was loud, fuzzy, pissed off. You know, you took it for granted after a while. I wanted to poke fun at it and as I thought about it, I was like ‘Okay, I’m making fun of this but there’s something to it," he said.

"I thought about Stevie Wonder growing up black and blind in a pretty rough time relative to civil rights. I think he had something to be pissed off about. But all his songs aren’t angry. They’re love songs or happy songs, all kinds of songs. Because he’d actually been through it, so he could appreciate the good sides."

One of Folds' most beautiful songs "Landed" has a kind of country vibe to it and some great vocal work, especially on the chorus. Folds said the song came to him while walking on the beach in Australia.

"I was thinking about my brother-in-law and I really wrote it from what I thought was his perspective — it turns out it was from my perspective," he recalled. "There was a time where he was working in a coal mine. So I can see that maybe if I wanted to connect with him that I was connecting the music in a little more country sort of way. Then there’s, I think, an interesting modal shift into the chorus. Suddenly, the seventh scale degree is flat. It’s just a different mode you wouldn’t hear normally alongside the verse. It stays in the same key but almost sounds like it’s changed keys. Back to my lab coat, that’s what I was really drawn to. It sounded stormy suddenly and it sounded like the footing of the tonality was being questioned for a second. And that to me seemed like a powerful place to put a story."