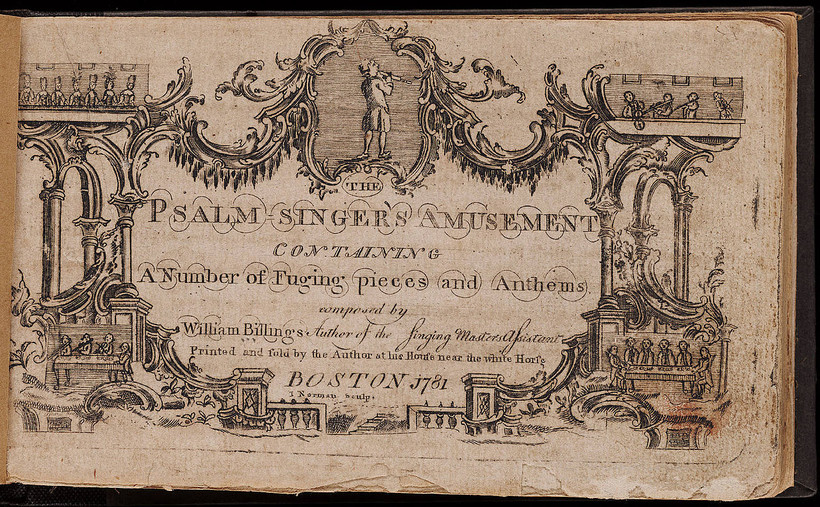 Although his disabilities made William Billings of Boston unsuited for service as a soldier during the American Revolution, he made a lasting contribution to the cause in the form of song.

By 1770, when he wrote his collection New England Psalm Singer, tensions were already high between American colonists and their English rulers. As a composer, Billings had been affected by the Stamp Act of 1765 and the Townshend Acts of 1767 and 1770, which raised the cost of paper. Massachusetts instituted a  policy of barring the importation of all goods subject to the duties, and so a combination of patriotism and necessity caused Billings to delay his book’s publication until he could get American paper.

The British occupation of the city from 1775 to 1776 inspired him to write “Lamentation for Boston,” an Americanized version of Psalm 137 published in 1778 in the collection The Singing Master’s Assistant. In the same collection he republished his song “Chester” in 1778, making his revolutionary sympathies clear:

And Slav’ry clank her galling chains,

We fear them not, we trust in God,

And so on, for five verses, celebrating the defeat of British General Burgoyne at the Battle of Saratoga in October 1777; the mistakes of General Howe, who let George Washington’s army slip from his grasp after the Battle of Long Island; the blunders of General Henry Clinton, whose Carolina campaign was called off after he led a disastrous attack on Fort Sullivan at Charleston; the embarrassment of General Richard Prescott, who was captured by rebel raiders in 1777; and the errors of Cornwallis, whom George Washington outmaneuvered at Princeton and whose surrender at Yorktown in 1781 would signal the ultimate American victory.

The Singing Master’s Assistant was the first tunebook published in America after the outbreak of the Revolution, and as an American book for American voices, it offered comfort to its readers in dangerous times.