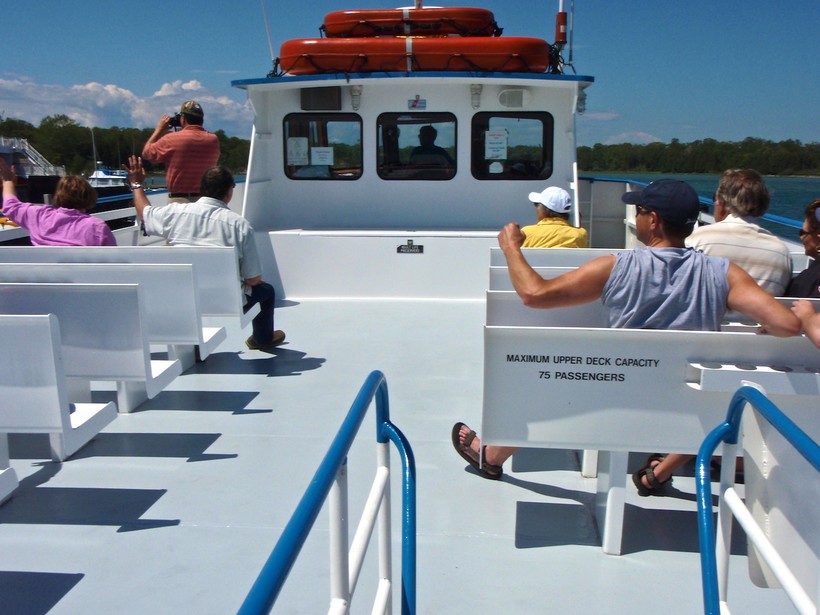 A Murder Mystery Aboard A Wisconsin Ferry

Several times a day in Door County, a ferry line travels between the Northport Pier and Washington Island. It’s a journey just more than four miles, running through a strait known as "Death’s Door."

Her latest mystery novel is once again set in Door County, this time about a fictional death on the ferry and a detective’s search for the killer.

"Death Rides the Ferry" is Skalka’s fourth mystery novel set on the peninsula in northeastern Wisconsin. And she doesn’t plan to stop.

Door County, Skalka says, is a natural setting for a mystery.

"It’s perfect," Skalka says. "Because it’s a little bit remote, yet it has a huge variety of people to be found here, especially during the warmer summer seasons. It’s got a very, very rich history."

Since her first novel, "Death Stalks Door County," was published in 2014, Skalka has built a steady following. Each book follows Dave Cubiak, a retired homicide detective from Chicago who moves to the island for a getaway and later becomes a local sheriff.

"A number of people came up to me and said, 'I can’t wait for the new book, when’s the next one coming out?'" Skalka said. "'Are you working on another one?' This is the kind of response I’m getting from readers."

Between Door County’s orchards and farms, fishing and shipbuilding industries, its tourist population and local artists, there’s something new to focus on with every story, Skalka said. The area has a quiet side and a busy side.

Readers familiar with Door County will recognize the locations in the book, some of which have had slight name changes. Skalka, who lives in Chicago, owns a lakefront cottage in the county.

Writing each book can be an extensive process, and it can get lonely, she said. Skalka has been writing about a book a year, typing away in solitude with her laptop and her cat.

She spends close to two months outlining the plot of each book before she writes anything.

"The story demands a certain structure and logic," she said. "Things have to hold together. The clues have to be there, the outcome has to be logical. It all has to be this puzzle, this 10,000 piece puzzle that you’re putting together."

The actual writing, then, is the fun part. But that plotting makes the mystery run smoothly, including a wicked twist at the end of her latest novel.