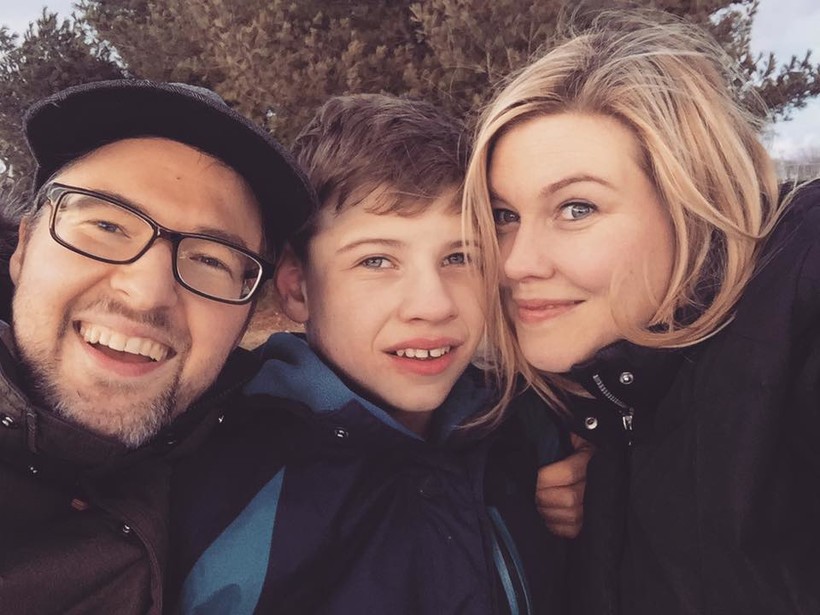 Todd, left, and Kelli Simpkins, right, alongside their 14-year-old son Mickey. The Madison family relies on Medicaid for prescriptions, and in-home and school support.

Mother: AHCA's Deep Cuts To Medicaid 'Would Be Detrimental To Our Family'

Now that Republicans in the U.S> House of Representatives have narrowly passed a health bill to replace the Affordable Care Act, its on to the U.S. Senate, which is likely to write its own version of the bill.

The House debate focused on what health plans should cover and whether those with pre-existing conditions could be denied coverage or charged more. There wasn't much debate over the cuts to Medicaid, which could be a sticking point in the Senate.

Six weeks after Republican leaders in the House yanked the bill from the floor for lack of votes, they tried again. This time, the bill was tweaked in hopes of breaking a deadlock between conservative and moderate Republicans. Kelli Simpkins, left, alongside her son, Mickey, 14, who has a congenital brain abnormality and seizures. Photo courtesy of Kelli Simpkins

The Washington, D.C., media was reporting every twist and turn, and Madison resident Kelli Simpkins anxiously followed every move on a deal that helped resuscitate a bill that nearly died on the floor in March.

"It goes on for so long that you start to feel some fatigue. Fatigue in just advocating," Simpkins said.

Simpkins opposes the Republican health bill because it could affect her family in a big way.

"Our child Mickey, he’s 14 years old, and he was born with a congenital brain abnormality," the mother explained. Mickey has trouble talking, saying two to three words "on a good day," because of limited language skills, Simpkins said.

And despite medications, Mickey has seizures once or twice a month in clusters, where each seizure lasts between 5 and 25 minutes and requires medicine to stop them.

One of Mickey's daily medications costs more than $1,900 a month, Simpkins said. Medicaid pays for that prescription and also covers in-home support and school therapy.

"A lot of these services are optional supports under Medicaid in Wisconsin, including the prescription coverage," she said. "So losing that would be detrimental to our family. We wouldn’t be able to afford everything he needs to live a full and healthy life."

The House's American Health Care Act calls for more than $800 billion in cuts to Medicaid, and Wisconsin could see a $1 billion reduction.

Disability rights advocates are "lighting up the phones" in congressional offices, said Lisa Pugh of The Arc Wisconsin, a nonprofit supporting people with developmental and intellectual disabilities.

The advocates are holding rallies in Wisconsin to try and get the attention of politicians. Over the weekend, a few dozen parents and advocates were outside the Wisconsin Capitol. There, Anne Morgan Giroux, of Madison, read a letter sent to U.S. Sen. Ron Johnson, R-Wisconsin, requesting a meeting.

"To date, each of our attempts has been ignored or denied," the mother of a daughter with epilepsy said of trying to reach Johnson. "If you are not willing to listen to your own constituents and learn from their real life examples, how can you possibly understand the impact of your vote, intentional or not?"

A spokesman for Johnson said the senator regularly meets with constituents and held a telephone town hall last week in which people voiced concern about the direction of health care.

Opponents of the Republican plan hope there's less consensus on deep cuts to Medicaid than there was in the House. One Wisconsin representative who backed the repeal from the beginning is U.S. Rep. Glenn Grothman, R-Glenbeulah. When it was first brought to the floor six weeks ago, he zeroed in on Medicaid as a way to get reluctant colleagues on board.

"If this bill doesn’t pass, we won’t be able to stop the bleeding on Medicaid funding. We’re approaching a $20 trillion debt," Grothman said on the House floor in March. "And of course the bulk of that spiraling debt is caused by mandatory spending, of which Medicaid is one of the worst parts."

One of Grothman's constituents agrees federal spending needs to be controlled, but not with deep cuts to Medicaid. Pam Delap, of Oshkosh, attended the Madison rally. Mickey, 14, of Madison, on Christmas. Photo courtesy of Kelli Simpkins

"We in the disability community who rely on Medicaid to keep our children healthy or even alive every single day have too much at stake here to put much faith in guarantees by people who haven't even read the full bill or waited for a full analysis of impacts," Simpkins said.

Advocates are waiting for the nonpartisan Congressional Budget Office analysis on what the Republican health plan, the American Health Care Act, will cost and how many people will lose coverage. They hope that will get the attention of politicians.

The Senate's waiting for this CBO analysis before weighing in on a bill that could be very different than the one passed in the House.

But as the House bill stands, Simpkins said it would be detrimental to her family and the economy.

"This bill would hurt so many sectors of our economy — rural hospitals, and home health networks, and therapy providers and public schools," Simpkins said. "People like myself and my husband would have to reduce work or quit. Thousands of families would lose their homes, lose their jobs, stop paying taxes, reduce their buying power. There is a huge footprint on this bad bill that's devastating to our state."