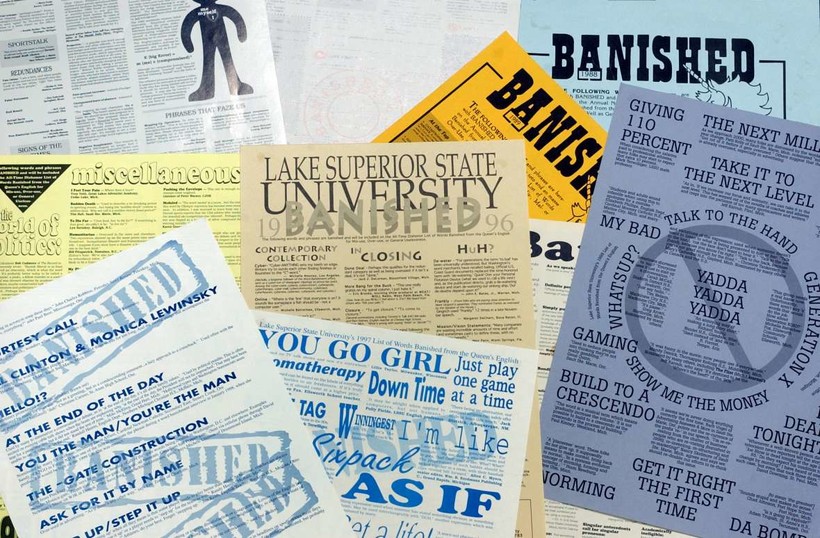 'The Most Important Election Of Our Time' And Other Banished Words, Phrases

While some eschew the optics displayed after the most important election of our time, others talk of POTUS' supposed collusion as a platform for litigation as if it's in their wheelhouse, even though few can actually wrap their heads around it.

Meanwhile, other people are pretty irked by almost every word in that sentence.

Platform, litigation, wheelhouse, eschew and 14 other words and phrases were all submitted for banishment from the English language by fed-up folks tired of their overuse in the past year.

John Shibley and Rodney Hanley agreed, and included the words and phrases in the "44th annual List of Words Banished from the Queen’s English for Mis-use, Over-use and General Uselessness" from Lake Superior State University.

"It's an unpopularity contest," said Shibley, a university photographer, staff writer and co-compiler of the banished words list. "Whatever gets on people's nerves."

Hanley, president of the university in Sault Ste. Marie who helped curate the list, said his attention was immediately drawn to the "-OTUS" varieties that eventually made the list. Nominated by David from Kinross, Michigan, these abbreviations — SCOTUS for Supreme Court of the United States; POTUS for president of the U.S.; and FLOTUS for first lady of the U.S. — are overused, Hanley said.

"We're not all secret agent men and women out there and we don't need to talk like that," he said. "I think it's pretty much disrespectful to the positions — just call them by their names."

The banished words list surfaced after a New Year's Eve party in 1975. University staff and faculty members discussed, over martinis, the words they heard that year that irked them.

In its five decades, the list has "banished" almost 1,000 words or phrases.

"We're not telling people to get rid of them completely," Shibley said. "We're just asking folks to back up and think about how they express themselves in the English language."

"Whatever floats to the top, whatever gets the most votes sort of steers the list and then we try to encourage people to have a clever reason for banning a word or phrase, because it's in humor," Shibley said.

Wheelhouse — Try to add to your bag of metaphors instead of always relying on this $20 word to mean you're an expert at something, Shibley said.

In the books ..., as in finished or concluded — Is it ever really in the books, though?

Wrap my head around — This made the list because, as Linda from Bloomington, Minnesota, pointed out, it's impossible and doesn't make any sense.

Platform — A "clever" nomination by a Californian who said this word is used as an excuse for people on social media, Hanley said he wants to use this platform to get rid of the word.

Collusion — John from Michigan said, "We all need to collude on getting rid of this word."

OTUS family of acronyms such as POTUS, FLOTUS, SCOTUS — These are just overused and useless, said David from Michigan.

Ghosting — Described by Macmillan Dictionary as "the practice of ending a relationship by simply disappearing, without any explanation," ghosting was submitted by Carrie, from Michigan, who said, "Somebody doesn't want to talk with you. Get over it. No need to bring the paranormal into the equation."

Yeet, as in to vigorously throw or toss — Nominations came from all over North America, said Shibley, who first learned about the word's popularity among youth in December.

Litigate — Believed to be misused by journalists and politicians to refer to controversy, Shibley responded by saying people should use a thesaurus and figure out what word they actually want to use.

Grapple – David from Traverse City, Michigan, said he'd "prefer to grapple with a wrestler or an overgrown tree," not an idea. He's got a point, Hanley said. Grapple, according to Macmillan Dictionary, means to fight someone.

Eschew – Mary from Canada said, "Nobody ever actually says this word out loud, they just write it for filler."

Legally drunk — It's a problem when you're illegally drunk. "You're always legally drunk until you're designated otherwise by an officer of the law," Shibley said.

Thought leader — Considering the rationale behind the submission from Michigan resident Paul that "if you follow a thought leader, you're not much of a thinker," the compilers thought this deserved a spot on the list.

Importantly — Constance from Texas said this word is "totally unnecessary when 'important' is sufficient."

Accoutrements — This word was submitted by Leslie of Arizona who'd just prefer to use the word accessories.

Most important election of our time ... — All elections are important, Hanley said of this submission by José of Ozark, Arkansas. "It seems redundant, it seems unnecessary and, I don't know, it just seems like it's too fluffy, or something," he said.