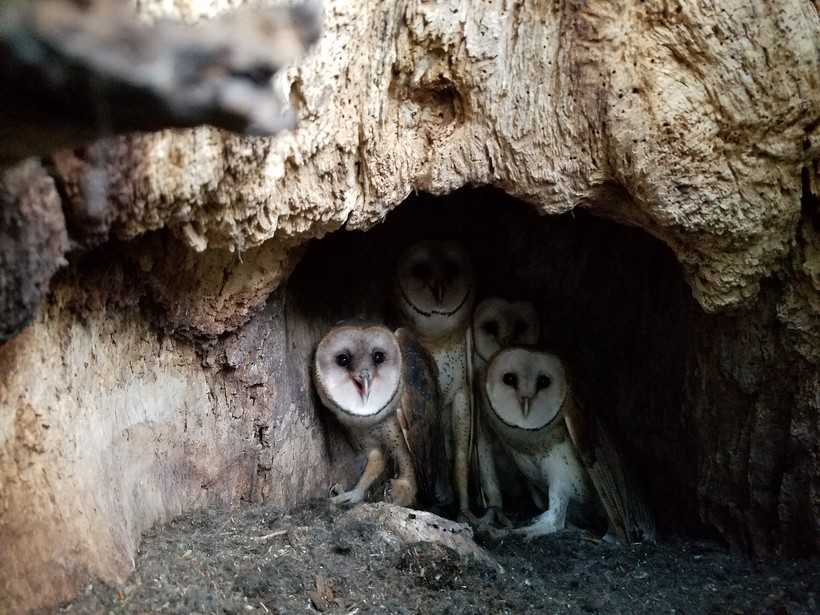 Barn owls were found nesting in a La Crosse resident's backyard, becoming the first confirmed nest in Wisconsin since 1999. Courtesy of Karla Bloem from the International Owl Center

'The most amazing find': First barn owl nest in over 20 years confirmed in Wisconsin

Karla Bloem, executive director of the International Owl Center in Houston, Minnesota, said it all started at the end of September when someone sent her a Facebook post from the Coulee Region Humane Society’s Wildlife Rehabilitation program showing a young barn owl they picked up in La Crosse.

"I’m like, 'Holy Moly!' I just about jumped out of my chair," Bloem said. "I couldn't wait to call them and find out more about it."

A resident had called the humane society after finding the young owl on the ground in their backyard. After talking with the property owner, Bloem got permission to investigate further. She said she knew immediately the owl must have come from a half-dead silver maple tree on the property.

Her husband navigated an endoscope, a stiff wire with a camera on one end, up the tree’s many cavities looking for signs of a nest.

"My husband’s moving the camera around, and I'm like, 'Oh my gosh, there’s legs!' And we moved it up, and whoop! There’s three barn owls in there. So that was the most amazing find ever. That was just unbelievable," Bloem said.

It’s the first barn owl nest confirmed in Wisconsin since 1999. The species became so rare during the early 2000s that the Wisconsin Department of Natural Resources removed the barn owl from their endangered species list in 2014 due to "a lack of records."

DNR conservation biologist Ryan Brady said barn owls are a very widespread species of owls, with populations on every continent except Antarctica. But in the United States, they tend to stick to western and southern states to avoid cold and snowy winters.

"We’re at the northern edge of where it's usually found. It likes open grasslands and generally warmer climates than where we’re at," Brady said. "But it declined pretty strongly during the latter part of the 20th century due to the loss of habitat and loss of nest sites with less abandoned barns and cleaner farming practices."

He said the decline was seen across the Midwest as farming moved more toward row crops like corn and soybeans. Brady said barn owls need open grasslands or pastures to hunt and had previously relied on older barns with livestock in them as a warm place to nest during winter.

"For us to have a bird nesting here... it's really a good thing for the species and maybe a testament to some of the grassland protection and restoration that’s occurring, some of the wetland restoration work, and then some of the nest box programs that are occurring in adjacent states," Brady said.

He said the return of barn owls could also be the result of milder winters in Wisconsin thanks to a changing climate.

Bloem, who has been an owl educator for over 20 years, said she frequently hears from older generations that they remember seeing barn owls in Wisconsin.

"If I’m doing programs in a nursing home or something and I talk about barn owls, many of them saw barn owls when they were young growing up on farms. So they were more common in the Midwest until (the) '50s, up to (the) mid-'60s or so," she said.

But Bloem said she had a hunch the owls were present in the region in the last few years after she picked up wild barn owl calls on a recorder at her organization’s aviary in 2014. Last year, she got a grant from the Minnesota Ornithologist Union to buy automated recording units to listen for them.

"They’re all in different locations and I have, just this year, recorded wild barn owls in five of those six locations," Bloem said. "So they’re here, they’re showing up, but they're super good at not being detected."

She said barn owls aren't talkative like most other owl species, despite being known for their blood-curdling screech that Bloem likens to a fan belt going out on a car. After moving one of her recorders to the nest in La Crosse, she found the adult owls rarely make noise and the young communicate with soft shushing sounds.

"They’re very nocturnal. Most owls are at least crepuscular, so you see them at dawn or dusk, and barn owls are just not," Bloem said. "They’re really good at not being seen. People don’t hear them much. So what we’re finding is they’re here more than anybody knows."

Brady said the DNR gets frequent reports from residents who think they’ve heard the barn owl’s unique screech. But he estimates that 99 percent of time, what someone has heard is the call of a young great horned owl.

He encourages anyone who thinks they’ve heard a barn owl to send a recording of the call to the DNR for confirmation.

Now that people know barn owls have returned to Wisconsin, Bloem said she’s hopeful residents will start keeping an eye out for the bird and help clear up the mystery that still surrounds the elusive species. That’s also why she worked with other wildlife officials to make sure the young barn owl in La Crosse was banded before being returned to its nest, helping track movement of the species.