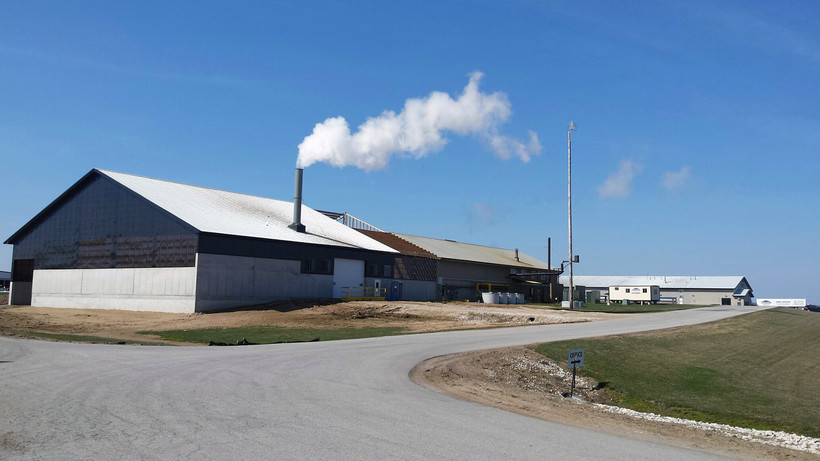 Many In Industry Worry About Risk Of Pathogens, Impact On Water Quality
By Chuck Quirmbach
Share:

A new University of Wisconsin-Extension study issued this week looks to help farmers reduce health and pollution risks when using an overhead boom or gun-like devices to shoot animal waste onto crops. The report comes as increasing number of Wisconsin farmers are looking to use the controversial fertilization technique known as manure irrigation to spray manure on their fields.

One of the farms hoping to adopt the technique is Pagel's Ponderosa Dairy in rural Kewaunee County. While the approximately 5,000 cows at the concentrated animal feeding operation produce a lot of milk, they also create piles and a lagoon of waste.

Owner John Pagel recently won the approval of the Wisconsin Department of Natural Resources to spread manure on some of the 8,000 acres of cropland he owns and rents, using what's called a center pivot system. Pagel said this type of spray irrigation has advantages over the more traditional way of spreading manure behind a tractor, including the ability to shoot the waste over crops growing in summer.

"We can put it on at low volumes — with low pressure, large droplets — 4 feet off the ground, and it goes in a circle," he said. "And then you can do it again a week later. So you got no chance of runoff. The plant takes it up, and you have increased yields."

Pagel also said being able to pipe manure to a pivot system would reduce the number of tanker trucks carrying animal waste on local roads.

He said he hopes to start using manure irrigation by June, but first has to win approval from the Town of West Kewaunee. Some local governments around the state have put restrictions on the spraying of waste, due to fears about pollution and harm to humans and wildlife.

But Pagel and some of the Wisconsin farmers who already use manure irrigation face some opposition, including from people within the agriculture community. A few miles away from Ponderosa Acres, a smaller farm owned by the Utesch family operates on just 150 acres of land. Lynn Utesch says spraying manure does carry a health risk.

"I think what we have to really realize is there no guarantee of no pathogens. And there are far greater issues than just water quality and pathogen issue — there's odor issues, there's economic issues for the rest of the community, and there's the impression the public will have about the dairy industry when this is actually implemented," he said.

Utesch served on the University of Wisconsin-Extension panel that released the state and federally funded manure irrigation report this week. However, he's trying to distance himself from some of the recommendations.

Thursday, during a webinar on the report, co-editor Becky Larson defended the study.

"I will say that we really genuinely tried to put as much science-based information and reflect every opinion we received throughout this process. I know people have strong feelings about this," Larson said.

UW-Extension plans a second webinar in May.

In the meantime, Jodi Parins of Algoma asked the DNR Board Wednesday to halt manure irrigation. Parins sits on five DNR workgroups looking into water pollution in northeastern Wisconsin.

"I ask this moratorium stand until a panel of independent medical practitioners are able to conduct comprehensive studies to determine there is minimal risk to the public's health and welfare," said Parins.

The board took no immediate action on Parins' request. A DNR official said his agency is "still digesting" the UW-Extension report.

Correction: An earlier version of this story said that the Utesch farm owns 150 cows. It actually has only 50 cows.