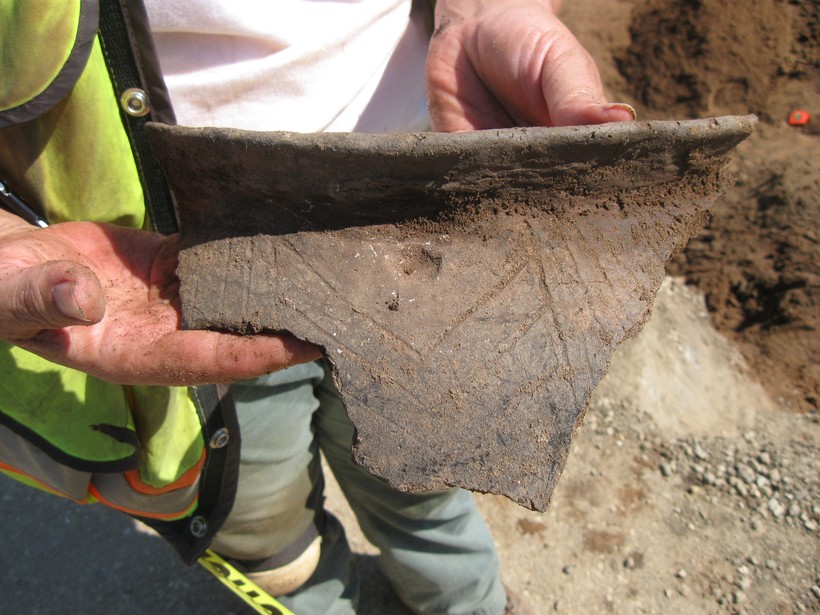 Cars drive slowly through the construction on Highway 35 in Onalaska, passing archaeologists and students excavating part of the road.

Connie Arzigian is a Mississippi Valley Archeology Center research associate and UW-La Crosse lecturer. She says they knew they’d find some artifacts, but not this many. Arzigian holds a large piece of a pot with a decorative, rounded rim. “You can see that there are finger slashes on the inside of this. Those tell us that this was made during the earliest period, from about 1300 to 1400 AD.”

The cooking pot was made by members of the Oneota tribe. As some of the area’s first farmers, they dug holes to store food or garbage and created fire pits. Those remnants are what archeologists are uncovering today. Under the north and southbound lanes, they’ve found more than 450 pits so far.

The Oneota lived in the area during the spring and summer, moving with the seasons. But Argzigian says they now think some Oneota remained annually. “We also have a lot of other evidence of deer hunting, which we don’t often find here because it’s a fall-winter occupation. We found a lot of deer bones smashed to get the bone marrow out. That’s telling us they’re here during multiple seasons of the year, and that’s a little unusual.”

The group has also uncovered some human remains. Arzigian says the Wisconsin Historical Society and the Ho-Chunk Nation will determine if the remains will be reburied.