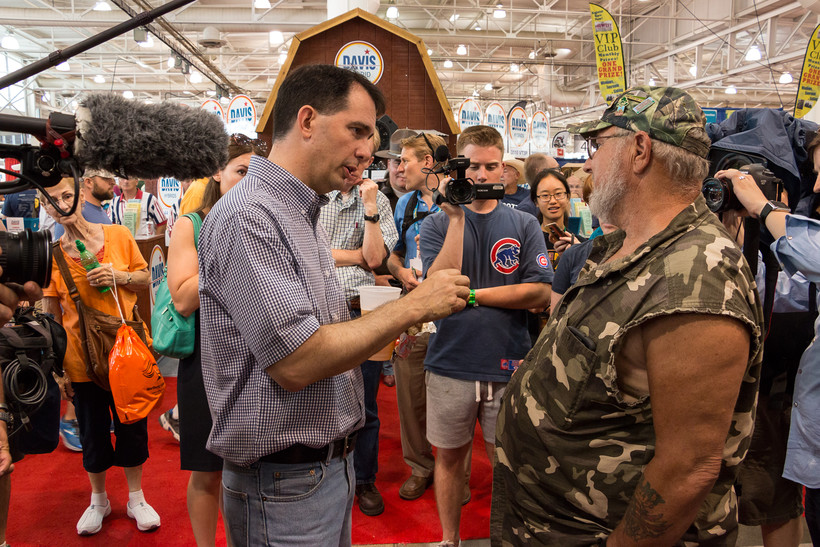 Walker’s approval ratings had held steady since he won his recall election in 2012, hovering just under 50 percent among registered voters. But according to a recent Marquette University Law School poll, that number is down about 8 points, bringing his statewide average to a little more than 40 percent.

"When you have the kind of support (Walker) has from within his own party, it gives you a pretty good floor that you're not likely to go below," said Journal Sentinel reporter Craig Gilbert. "So you really have to start sliding quite significantly among independents to get down to the 40 or 39 percent where he is right now."

Going more in depth with the poll results, Gilbert reported:

In addition to several unpopular budget items, including the controversial cuts to the University of Wisconsin System, Gilbert suspects Walker’s approval drop is the result of his presidential bid. This month’s poll found that 63 percent of Wisconsin’s registered voters said they don’t like Walker’s decision to run for president.

"People know he’s not spending time here in Wisconsin being governor ... He’s paying a price for that," said Gilbert, adding a quote from Marquette pollster Charles Franklin, who told the Washington bureau chief: "Voters have gotten the sense that he’s 'just not that into us anymore.'"

Gilbert said Walker has changed his message on the campaign trail in an effort to win over far-right GOP voters in Iowa and South Carolina — a message he says is much more conservative than what the governor offered to moderate Republicans in Wisconsin.

"I think (Walker’s) also been kind of defined by a different set of issues in the presidential campaign, hot-button cultural issues like immigration and abortion, compared to the kinds of issues he focused on rhetorically when he was running for governor," Gilbert said.