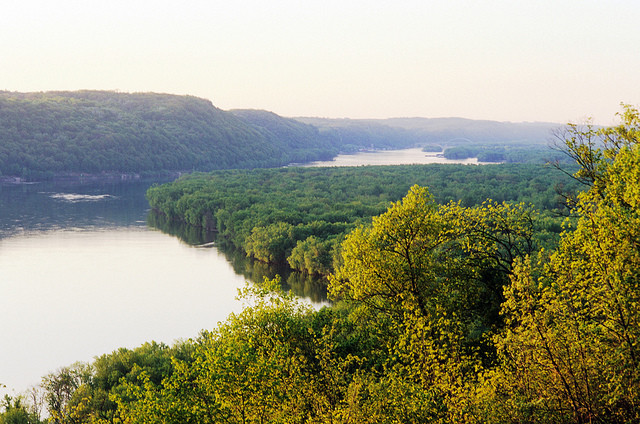 Wisconsin and neighboring states celebrated 30 years of a national partnership to restore the Mississippi River at an event in La Crosse on Monday.

The Upper Mississippi River Restoration program is a partnership between 12 state and federal programs, including the Wisconsin Department of Natural Resources, the U.S. Army Corps of Engineers and the U.S. Geological Survey. For the past 30 years, the project has been recording data about the river and restoring habitats for wildlife from Minneapolis to southern Illinois.

The UMRR program was created by Congress to address public concerns around the future of the Mississippi River, but Wisconsinites were calling for changes before the project was started, according to Jeff Janvrin, a DNR Mississippi River Habitat specialist.

"The state of Wisconsin actually sued the Corps of Engineers for the way they were doing dredging on the river, and that was back in 1972," Janvrin said.

Now the UMRR program has one of the most extensive river monitoring programs in the world and helps inform future conservation efforts.

"We have 30 years of data to draw from as we're trying to figure out new mysteries," Janvrin said. "(It) allows us to see a better way, in a lot of cases a less expensive way, to restore the types of habitat that the public values."

Some are looking to replicate the UMRR program down river.

"(The Mississippi River Cities & Towns Initiative is) trying to partner up with the Nature Conservancy to see if there's a way for us to be able to have the same type of ecological restoration on the lower stem of the Mississippi River, and ultimately to have a program authorized by Congress, which would have a restoration component along with the navigation," said La Crosse Mayor Tim Kabat.

Kabat said the Mississippi River is an important economic factor in cities such as La Crosse.

"It also provides recreation and tourism, and it is a very crucial wildlife and bird corridor," Kabat said. "You've got all those things that are so critical just on their own, but if you combine those all with the river, it truly is the most remarkable resource in this country."

But several program leaders voiced their concerns about the future of the program as state and federal funding becomes harder to maintain.

"We're in a resource constrained environment, and so it's really important that we leverage the resources that we have in the most efficient manner," said Major Jason Toth, deputy commander for the St. Paul District's U.S. Army Corps of Engineers.

Janvrin said he’s also worried the program has lost its grassroots support as more of the original activists grow older.

"Those voices need to be replaced," Janvrin said. "We need a new generation of folks who have a love for the river, that see that we're doing good and how much better it can be."

The DNR reported that the UMRR program has helped restore habitats for a variety of fish, waterfowl and plant species.