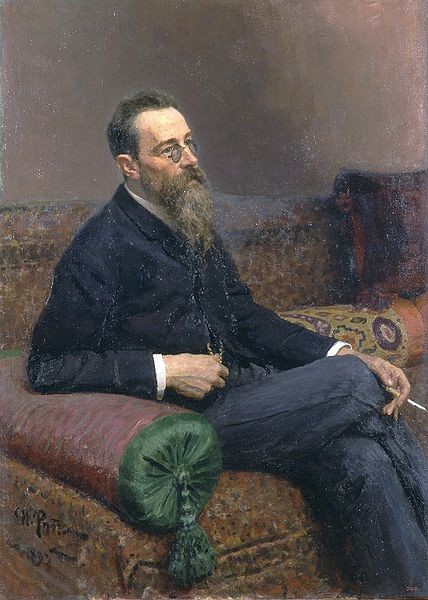 In 1889, one M. P. Byelyayev decided to promote Russian music at the Paris Universal Exposition. He arranged for two symphonic concerts of Russian music at the Tocadéro Hall to be conducted by Nikolai Rimsky-Korsakov. Also participating would be a pianist named Lavrov and the impressive young composer Alexander Glazunov, who would be represented on the program by his second symphony and a symphonic poem.

The French orchestra was excellent and the music included some of the best new works Russia had to offer--including Rimsky-Korsakov’s own Antar Symphony and major compositions by Tchaikovsky, Mussorgsky, and Borodin, among others.

The audience responded with ample applause during the concerts of June 22 and 29, but according to Rimsky-Korsakov a key ingredient was missing.

He noted that “while advertisements for all kinds of institutions were being displayed at every street corner, shouted everywhere, carried on people’s backs, printed in newspapers in large type—Byelyayev confined himself to modest announcements.”

The impresario had a curious attitude toward advertising. He reasoned that anyone who was interested in the concert would find out about it and come, and that those who were not interested would not bother to find out and not come. As far as he was concerned, those who would come only because they had nothing else to do were not welcome at all.

“With such ideas,” Rimsky-Korsakov remarked, “no large audience was to be expected.”

And then he pointed to a deeper cause of the scant audiences—for foreigners, Russian music was simply not important enough.

At the same time, he said, concert-goers craved the familiar and fashionable and could be lured to new music only by popular artists and appealing advertisements.

Byelyayev lost a lot of money on the Russian Symphony Concerts at the Exposition—and had expected to—but according to Rimsky-Korsakov, his opportunity to make Russian music better known was also lost because he failed to advertise.