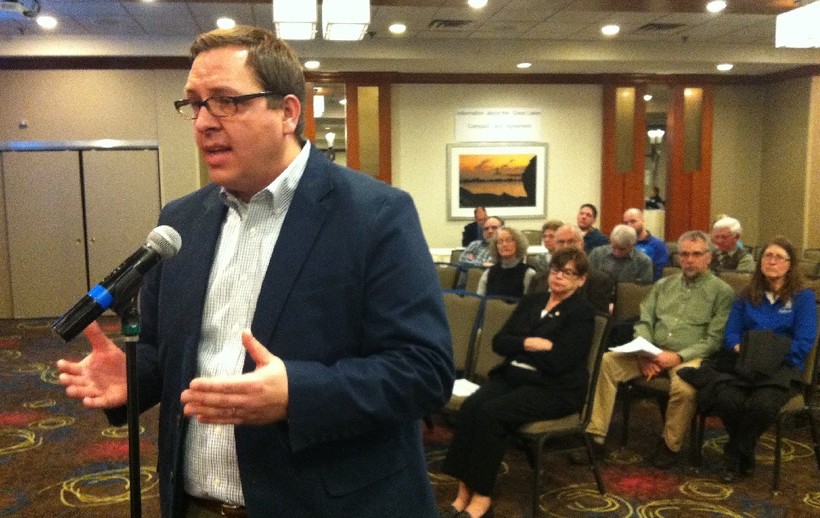 Marc Smith, policy director for the National Wildlife Federation, speaks out against the proposed Waukesha diversion.

Not a single person spoke in favor of Waukesha’s plan to get drinking water from Lake Michigan at a public hearing Thursday evening in Duluth, Minnesota.

About 100 people attended the hearing, many of them questioning whether the city meets the standards to divert water under the Great Lakes Compact. Eight governors signed the compact in 2008, agreeing to collectively manage the lakes and ban diversions from the basin, with few exceptions. Waukesha is the first eligible city to request an average of 10.1 million gallons a day from Lake Michigan. However, many of the plan's critics claim the city is asking for more water than it needs to satisfy growth and expansion plans.

Twenty-two people at the hearing, along with other organizations, urged Minnesota state officials to pass on a message to Gov. Mark Dayton — including Minnesota Sen. Ann Rest.

"We hope that you will come to the conclusion to ask the governor to just say no," she said.

Waukesha is seeking Great Lakes water in part because the city is under a 2009 court order to come into compliance with radium levels in its drinking water. Critics, however, argue Waukesha can treat its radium-contaminated drinking water like several other Wisconsin cities already have.

"Our well water in Grand Marais is often contaminated, and we have to treat our well and filter our well water in addition to make sure that we have clean water," said Bob Nesheim. "I would expect other people to do the same."

Waukesha Water Utility Manager Dan Duchniak, who attended the hearing, said that’s not the only issue.

"If this was just about radium, we’d be treating for the radium and not here tonight asking for this diversion," he said.

Duchniak contended the city has changed its application 22 times to explain its search for alternatives. He noted that an option to seek shallow well water available to the city is near a sensitive environmental area.

"It would harm 900 to 1,000 acres of primary wetlands in the area, which is equivalent to 700 football fields," he said. "When you look at the alternatives, the alternatives have significant adverse environmental impacts associated with it."

Duchniak also noted that the city will return its treated water to Lake Michigan. At that, Duluth’s Lynn Watson said she’s never heard of a river — namely, the nearby Root River, which would receive the treated water returned to Lake Michigan — improving when a municipality adds something to it.

"If Flint was asking for some fresh water, that might be different," said Watson. "But this is just a community that seems like they want it easier."

The city’s water utility manager contended that a water diversion would cost Waukesha $40 million more than the alternatives they researched.

Yet, opponents fear a water diversion would set a dangerous precedent for communities along the Great Lakes to withdraw water.

Meanwhile, an author who wrote a book on the Great Lakes Compact said the earliest a decision would be forthcoming on Waukesha’s request would be late May. Peter Annin — author of the "Great Lakes Water Wars" and co-director of the Burke Center for Freshwater Innovation at Northland College — said the fate of the proposal depends on whether eight Great Lakes governors will unanimously sign off on Waukesha’s proposal, and whether their decision will be challenged in court.

"We’re going to be hearing about Waukesha for a while," he said.

Public comments on the proposed diversion are due March 14.