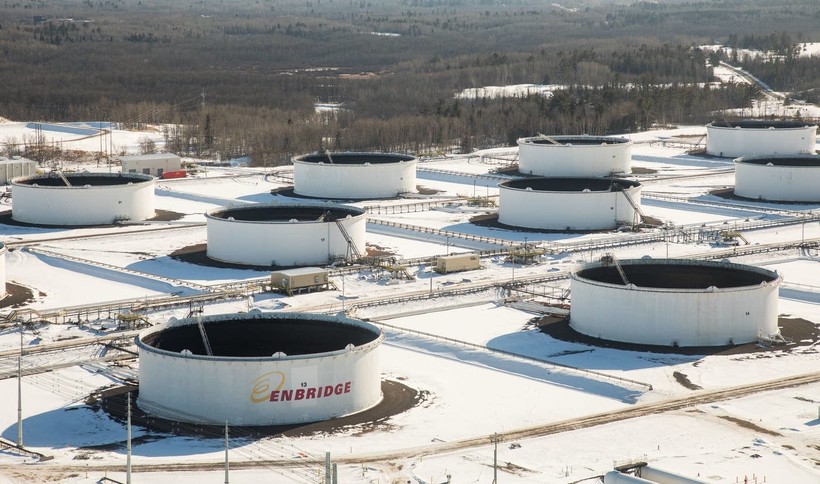 Enbridge Energy's Superior Terminal in February 2018. The terminal receives a vast majority of its oil from Canada and a lesser amount from North Dakota. According to Enbridge in 2018, 21 percent of all daily U.S. crude oil imports pass through the facility. Derek Montgomery/MPR

Months after a court decision threw its future into question, the Line 3 pipeline replacement project is moving closer to regaining the permits it needs to begin construction.

The Minnesota Public Utilities Commission voted 3 to 1 Monday to approve a revised environmental review for the Line 3 pipeline replacement project. The move set the stage for the commission to also approve a certificate of need — also in a 3 to 1 vote — one of several permits required to build the new Enbridge Energy pipeline, which would replace an aging crude oil pipeline that crosses northern Minnesota.

The PUC originally voted to approve the controversial oil pipeline project in June 2018. Calgary-based Enbridge is proposing the new line, along a different route, which would have the capacity to transport about twice as much oil as the current pipeline is allowed to carry.

But the Minnesota Court of Appeals rejected an environmental study that was originally prepared for the project because it failed to assess the impacts of a hypothetical oil spill in the Lake Superior basin.

The Minnesota Department of Commerce revised the study, known as an environmental impact statement, to include an analysis of a potential spill into Little Otter Creek. The creek flows into the St. Louis River, which forms the headwaters of Lake Superior.

“I myself found the analysis sufficient to meet the adequacy standard under Minnesota rule,” PUC chair Katie Sieben said Monday.

Sieben said the modeling of the Little Otter Creek site was done using similar considerations to other sites that were modeled for potential spills in the original environmental impact statement. She said the analysis included potential impacts on the St. Louis River estuary and Lake Superior, and adequately looked at impacts of a spill on the environment.

Matt Schuerger was the only commissioner to reject the revised environmental study.

He said he agreed with several pipeline opponents — including the groups Honor the Earth and Friends of the Headwaters — that the selection of Little Otter Creek as a spot to model a potential spill did not adequately represent the risks of a potential spill to the St. Louis River estuary, the Duluth-Superior harbor and Lake Superior.

He also said the revised environmental review failed to consider the current scientific understanding of climate change, and how the increased severity of rainstorms could impact spills in the Lake Superior watershed.

“Minnesota’s declared environmental policy is to create and maintain conditions under which humans and nature can exist in productive harmony,” Schuerger said. The environmental study “does not yet do that in my viewpoint.”

Paul Blackburn, an attorney representing Honor the Earth and the Sierra Club in the case, suggested that the groups he represents — and others — will again challenge the environmental statement at the Minnesota Court of Appeals if the PUC fails to broaden its analysis of the impacts of a potential spill on Lake Superior.

“We want that analysis,” he said. “If you don’t give it to us, we’re going to push for it every way we can.”

The commission heard arguments Monday afternoon from the parties in the case, including Enbridge, about whether to reissue a certificate of need to the project. Once commissioners voted to approve the new certificate of need, they moved on to considering the project’s route permit. The meeting, at the PUC’s headquarters in St. Paul, could extend into Tuesday.

If the PUC also grants the route permit approval, groups fighting the pipeline are again expected to file legal challenges. Enbridge also needs environmental permits from additional state and federal regulators before it could begin construction.

The company has said it hopes to begin work on the project this year.

Editor's note: This story was originally published on MPRNews.org.