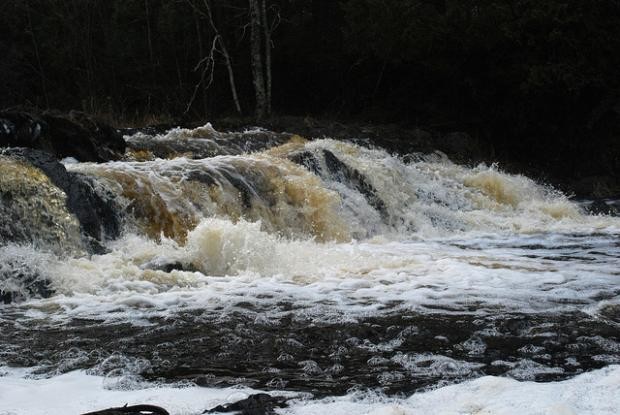 The Bad River, pictured above, runs through northwestern Wisconsin. The proposed GTAC mine is within its watershed, a major factor behind opposition to the plan. Photo: Joshua Mayer (CC-BY-SA).

The president of mining company Gogebic Taconite said it’s unlikely they’ll resume work at the proposed mine site in the Penokee Hills this winter.

GTAC President Bill Williams said they had plans for more monitoring wells, but that’s been delayed. He said they’re stalling work because the company wants assurance a mine is possible in the Penokees.

“We’ve seen the EPA step out against the Pebble Mine up in Alaska. Are we on their radar? Don’t know,” Williams said.

The Environmental Protection Agency used a section of the Clean Water Act last February to suspend mining activity by the Pebble Mining Company because it endangered the pristine Bristol Bay in Alaska.

Williams said that case, as well as a draft Iron County zoning ordinance, may prevent his company from mining at the northern Wisconsin site. Tribal leaders asked the EPA to intervene last fall.

Wisconsin Department of Natural Resources hydrogeologist Larry Lynch said the work GTAC has completed so far hasn’t led to much groundwater data collection. Currently, the site has five holes ranging from 460 feet to 900 feet deep, according to Lynch.

“They haven’t instrumented those holes fully,” he said. “They’re getting water levels out of them, but they need to do additional work on those holes to get more meaningful water level information.”

Lynch said the mining company needs to collect data to understand how the groundwater system moves through the site which would determine how a mine may affect groundwater.