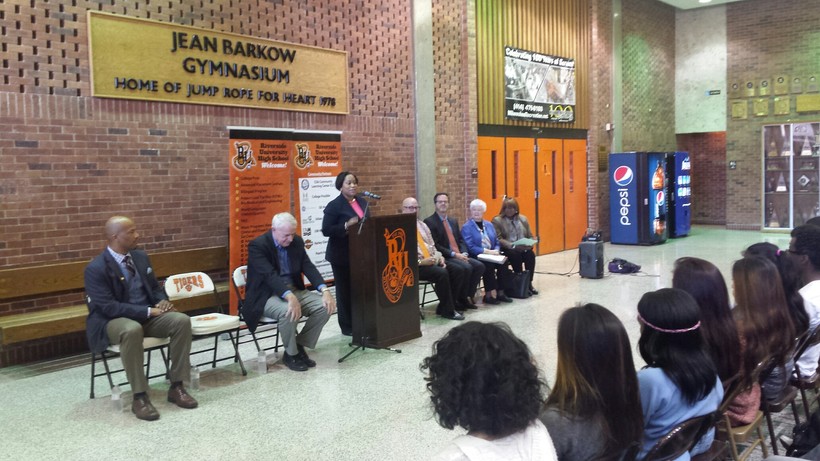 Voter registration efforts for next year's elections are underway, including one aimed at nearly 4,000 high school students in Milwaukee.

Officials with the Milwaukee Public Schools are expanding previous voter registration programs targeting students who will turn 18 during this school year. A packet of information about registering will go to social studies teachers at more than 40 high schools.

Riverside University High School senior Kyra Campbell said she plans to register when she turns 18 in March. She said politicians are more likely to listen to voters.

"If you do vote, you going to get more attention," she said. "But if you don't vote, they going to look at you and notice you, but they (are going to) like, 'You didn't vote, so why does it matter?'"

Milwaukee Public Schools Superintendent Darienne Driver said the information packet, known as the My Vote, My Voice Toolkit, will include rights and responsibilities about voting, and reminders about types of identification needed to register and vote. It's expected a Wisconsin law requiring a photo ID at polling places will be in effect next year. Driver, who is African-American, said voting matters.

"It's a very personal thing, for me, having a very strong family history around voting," she said. "My parents and grandparents were very active in registering citizens to vote. One hundred years ago, women didn't have the right to vote, African-Americans didn't have the right to vote (or, in many cases, were discouraged from voting) so the fact that we have these opportunities is something that's very personal."

Driver said the majority of the 3,800 MPS students who will turn 18 this school year are people of color.

The city of Milwaukee Election Commission is helping with the voter registration effort. Executive Director Neil Albrecht said nationally, only about 19 percent of people aged 18 to 28 voted in 2014, a decline from the 2008 election, when Barack Obama first ran for president. Albrecht said political candidates need to try to engage all age groups, but especially potential first-time voters.

"Turnout is very candidate driven. Very issue driven," said Albrecht. "But I would say it's incumbent on candidates to come up to with messages that are meaningful to young people. That's how we inspire them."

The League of Women Voters of Milwaukee County is helping distribute the My Vote, My Voice Toolkit to the Milwaukee high schools.