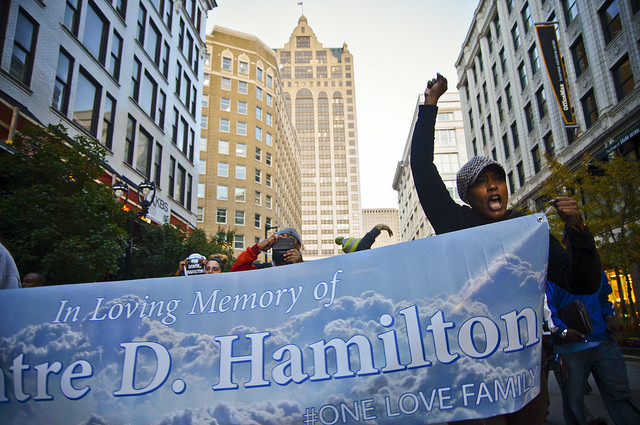 Federal prosecutors say they will not file civil rights charges against a Milwaukee police officer who fatally shot a mentally ill man last year following a confrontation in a city park.

In a news release Tuesday, federal prosecutors said they don't have enough evidence to prove Officer Christopher Manney intentionally broke the law when he shot 31-year-old Dontre Hamilton during the confrontation in April 2014. The Justice Department said the decision was made based on eyewitness accounts, physical evidence, Manney's testimony and use-of-force experts.

Manney had encountered Hamilton in Red Arrow Park after responding to a voicemail from a concerned citizen regarding someone lying down in the park. By Manney's own account, a struggle between the two began after the officer attempted to conduct a patdown on Hamilton. Hamilton reportedly began to use Manney's baton to attack the officer, after which Manney shot Hamilton. Hamilton's family has expressed disappointment with the prosecutors' decision. After hearing the news, Hamilton's brother, Nathaniel, was asked if the federal government let the family down.

"What do you think? As a white man, did you think they were gonna charge Christopher Manney, a white man, in a black man's murder? Did they let you down?" he said.

Family attorney Jonathan Safran said they plan to file their own federal civil rights case, which would have a lower burden of proof than a criminal case.

"Christopher Manney's decision to shoot Dontre Hamilton 14 times, taking his life — we think those things are evidence of a civil rights violation, and we think we can pursue that and at least provide the Hamilton family with some monetary award," Safran said.

Manney was fired after the shooting, but he was approved for a disability pension after he claimed he was suffering from severe post-traumatic stress disorder as a result of the shooting.

Milwaukee Police Chief Ed Flynn said he's not surprised by the decision, but said he's asked the DOJ to conduct a review of the city's policing practices.

Flynn removed Manney from the force for violating department procedures in the altercation that led to Hamilton's death. However, he said he agrees with the DOJ that Manney was justified in using deadly force to resolve the incident.

He said now he wants federal officials to review his department's overall performance in policing the city.

Editor's note: This story has been updated to include statements from Nathaniel Hamilton and Police Chief Ed Flynn. Chuck Quirmbach contributed reporting.