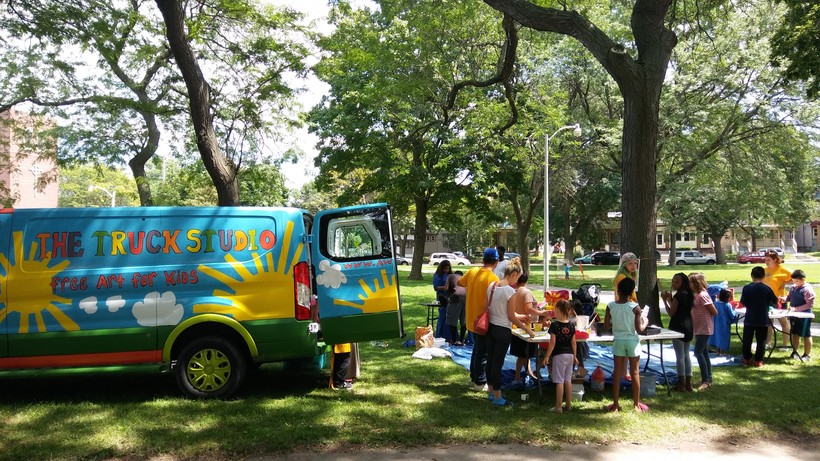 The Truck Studio artists setting up at Clarke Square Park in July 2017 as youth gather for three hours of free drop-in activities. Photo courtesy of Artists Working in Education

The Milwaukee-based nonprofit Artists Working in Education is celebrating its 20th year of connecting community artists with underserved neighborhoods.

One of their programs is the Truck Studio — which transports artists and supplies in four hand-painted, colorful vans to Milwaukee County parks and libraries — it's a channel for the artists to host free, drop-in art programs for area children.

"It’s a really great opportunity for youth to express themselves and create art and take something home with them that hopefully they can recreate at home," said Raina Johnson, donor stewardship and storytelling manager at Artists Working in Education. The program reaches all of the Milwaukee Public Library branches during the school year and about 19 Milwaukee County parks and playgrounds during the summertime. Each visit has a theme, and literary ties are often woven into the projects.

Both the libraries and parks have been longtime public partners of the program, Johnson said.

Lessons and projects to encourage creativity and inquisitiveness, while cultivating a sense of community, are cornerstones of the program, said Luther Hall, an artist with Truck Studio. A young artist paints in a park in 2017. Photo courtesy of Artists Working in Education

"The most important driver for me is that we’re giving kids the opportunity to express themselves and find outlets for expressing emotions like rage, anger, fear, love, friendship and things like that," he said.

The founders of Artists Working in Education, Barbara Manger and Sally Duback, started the Truck Studio in 1999 as one of two main programs the organization operates.

What began with only one van and four sites has since expanded to a fleet of four vans – and currently fundraising for a fifth – that visits nearly 90 sites throughout Milwaukee each year.

Recently, one of the projects taught the kids how to make hats as a way of expressing themselves and instilling a sense of identity, Hall said.

"I learn so much more from the kids I work with at the libraries than I think any adult in a formal education setting could teach me," Hall said. "They teach me to think outside of the box."

Artists Working in Education employs 49 artists and has 65 volunteers who work in their programs that reach over 6,200 Milwaukee-area youth each year, according to their website.

The organization aims to build a pipeline of talent from high school to the college level through volunteer positions and internships, Johnson said.

Ariana Vaeth, another artist working with the Truck Studio program, seconded Hall’s sentiment and added that the program brings out confidence in the kids.

"It teaches young kids to think creatively, so making these art projects are really clever ways for us to get in conversation on their level, on their terms," she said. Artists Working in Education is currently running a crowdfunding fundraiser to purchase a new van to have a larger presence at parks, playgrounds and summer concerts until the end of March with a goal of $7,500, she said.