Milwaukee Day Of Action In Photos

"Power to the polls," "women for the win" and "take it back" were just a few of the rallying cries heard by several hundred people who gathered in front of the Milwaukee County Courthouse on Saturday. The event, called the Milwaukee Day of Action, was the local followup to last year's Women's March, which protested the inauguration of President Donald Trump.

Organizers estimated up to 3,000 people attended the event, while the Milwaukee Journal Sentinel reported more than 1,500 attended. The march ended at the Wisconsin Center, where participants could donate to several causes and learn how to get involved with community organizers.

In front of the courthouse, speakers aired their grievances with the Trump administration's policies toward marginalized groups, while encouraging attendees to pay special attention to the needs of women of color. Genevieve Stenz, center, was one of the many attendees hoping for more progressive wins during the upcoming midterm elections. Ximena Conde/WPR

Milwaukee march organizer Sarah Pearson shouted to the crowd, "Get ready in 2018 to take it back," and was met with applause and chants of "Take it back! Take it back!"

The mid-term elections took center stage during the event as speakers made the case for electing more progressive women into public office — with a couple of candidates taking to the podium.

Marya Jimenez was one of the speakers. A Deferred Action for Childhood Arrivals recipient, Jimenez called for a legislative solution to DACA. Jimenez said events like the Milwaukee Day of Action keep issues like immigration in the public eye.

"I hope our female youth of color are inspired to create change and join the fight," Rogers said.

Among the crowd, attendees listed their own reasons for participating with signs calling for protections of issues, ranging from women’s rights and voter's rights to climate change.

"It's important for us to show our children what democracy looks like," said Milwaukee resident Elizabeth Draper, who attended the event with her husband and two young children.

Draper said she didn't think the current administration reflected the spirit of the country and encouraged peaceful protest.

"If you disagree with something, it's important to stand up and say so," Draper said.

Besides entire families, men were also in abundance.

Attending his first political rally, Brad Nordby said he traveled from Plymouth with his wife, Liz Nordby, because he wanted to support her. Nordby said he's embarrassed by Trump's behavior.

"I think with the lack of professionalism that's been seen across the board, something's got to be done," Nordby said. 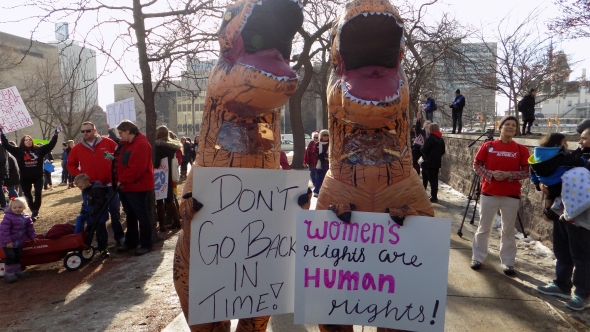 Speakers and attendees took multiple jabs at some of Wisconsin's most prominent Republicans, including Gov. Scott Walker and U.S. House Speaker Paul Ryan, of Janesville.

Following the speeches, the crowd marched on the city's sidewalks from the courthouse to the Wisconsin Center, chanting, dancing and enjoying the support of many passing cars.