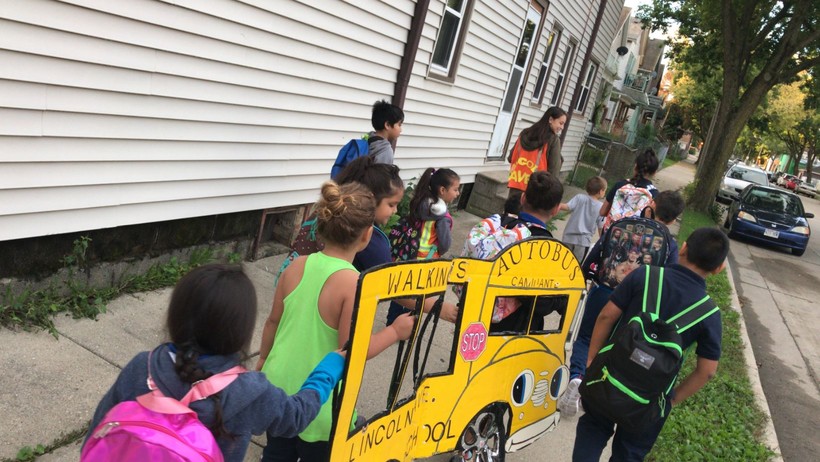 Not all buses have wheels.

"We have this really cute cut out of a walking school bus," she said. "It's got little windows in it and little kids can hold onto the handles and peek their heads out the window, and then we walk to school together."

For the last year, every Monday and Friday teachers and parents have volunteered to pick up neighborhood kids and walk them to school to help Lincoln Avenue parents overcome barriers to getting their kids to school safely.

"That area of Milwaukee, parents don't really feel safe having their kids walk by themselves because of some crime in the area," Stieber said.

Many of the parents also work third shift or have younger children at home, making it tough to get their kids to school on time, said Misty Ellen Kreider, school support teacher at Lincoln Avenue Elementary School.

The school’s absentee rate was hovering around 12 percent last year, she said, driven up by repeated absences from many of the same children.

"We were trying to be creative and find an alternative for those families that were struggling to make sure that their kids could get to school," she said. "Our students are more successful if they are in school every day."

Since it launched, the walking school bus has seen some dramatic changes in the children that participate. Stieber described one student on the route last year as being very detached from the school community.

"He had a really low attendance rate," she said. "Now that he's been on the bus, we have seen significant improvements in his behavior — he's smiling a lot more and he loves when we pick him up in the morning."

In that window of time his attendance record jumped from about 50 percent to 80 percent, Kreider said.

A big part of the walking bus' power is the opportunity it gives the students to connect to each other and forge bonds, Stieber said.

"It's really like a social group for these kids," she said. "Once we get to school, when it's colder out we drink hot cocoa ... it’s a fun way for students to really connect over all living close (to each other)."

And it’s not just exciting for the children, Kreider said, the community has rallied around it, too.

"We get honks from area neighbors and lots of waves," she said. "The whole community surrounding the school building is very welcoming to us in the morning."

Initially just on Fridays, the walking school bus expanded to include Mondays about three weeks ago after the school saw the significant improvements in attendance, Stieber said. The school is also working on adding another route so they can pick up more students.

"Traditionally our attendance has been low on Mondays and Fridays," Kreider said. "But for students that have traditionally high absentee times, getting that kick start on Monday mornings has helped them remain through the week."

Both Stieber and Kreider would encourage other districts to look into starting a walking bus.

"Just start," Stieber said. "Maybe you won't have a lot of buy-in in the beginning ... but once you start, you get to see what a joy it is to pick up these kids ... when the sun is rising and everyone's happy and walking to school."