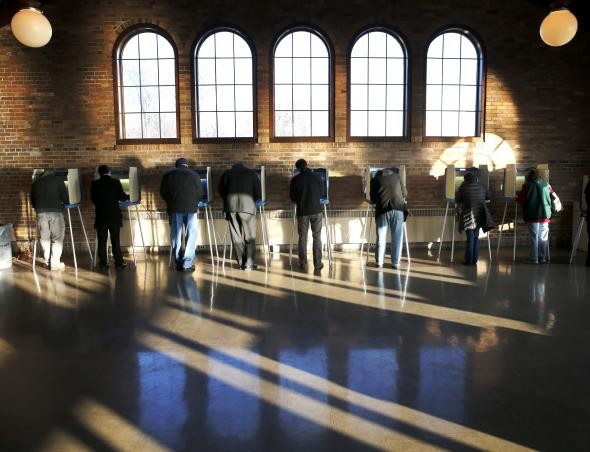 Milwaukee Would Join 8 Other Wisconsin Counties That Have Held Such Votes
By Corrinne Hess
Share:

Milwaukee County could be moving forward with a plan to ask voters if the state Legislature should create a nonpartisan method for drawing congressional and legislative districts.

On Thursday, the County Board’s intergovernmental committee voted 4-1 to move forward with putting an advisory referendum on the April 7, 2020 election ballot. The issue will go to the full board later this month and will likely find support. The board has already come out in favor or nonpartisan redistricting.

Milwaukee County would join eight other Wisconsin counties and one town that have held advisory referendums on the redistricting issue. Voters in communities including Dane, La Crosse, Eau Claire and Outagamie counties have all voted overwhelmingly in favor of a nonpartisan reappointment procedure. More than 40 county boards have also passed resolutions supporting nonpartisan redistricting.

Before the vote, several Milwaukee County residents voiced their support for the referendum.

Scott Vanderveen, of Wauwatosa, said he voted for the first time in 1972 and has not missed an election since. He said what he wants is for everyone’s vote to count.

"If the maps are drawn so the outcome is already determined, we don’t have that option," Vanderveen said. "This is a terrific step forward. Maybe not the ultimate solution, but certainly let’s move forward and make sure the votes of every citizen counts."

Leslie Shippee, of Milwaukee’s Bay View neighborhood, said if people don’t have a chance to have their voice’s heard, they can’t participate in their government.

"I feel this is about the only thing open to us and we should have a chance to be heard," Shippee said.

Wisconsin's current maps were drawn in 2011 by the Republican-led state Legislature. They were the subject of a federal lawsuit until June, when the U.S. Supreme Court ruled 5-4 that federal courts don't have the power to decide cases related to partisan gerrymandering.

The nonbinding advisory referendums in counties across the state will likely carry little weight in the Republican-controlled Legislature.

But Mordecai Lee, professor emeritus at the University of Wisconsin-Milwaukee and former state lawmaker, said while some may view advisory referendums as silly, it creates a public record of public opinion over the long term.

"Politics are about self-interest and Republicans perceive that any change in redistricting that would be nonpartisan will probably hurt them because of the way they crafted the last reapportionment after the last census," Lee said. "We just can’t expect politicians to do something that will hurt their own self-interest; that might even hurt their ability to get re-elected."

Lee said it is relatively odd that a state Legislature redistricts for state offices and congressional offices.

"So you’ve got 50 states using different standards for being elected to the same body," Lee said. "It would make more sense for Congress to do it, but they wouldn’t touch it with a 10-foot pole."