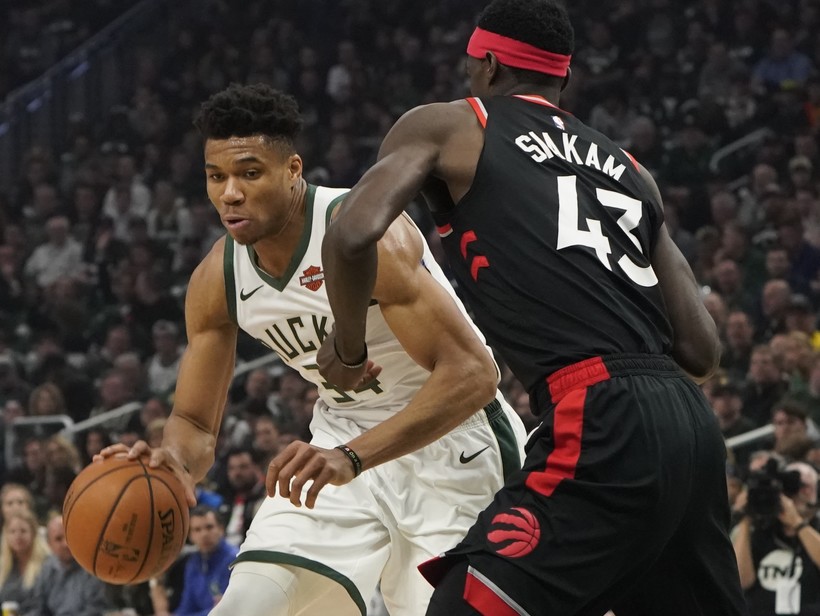 Milwaukee Bucks' Giannis Antetokounmpo tries to drive past Toronto Raptors' Pascal Siakam during the first half of Game 2 of the NBA Eastern Conference basketball playoff finals Friday, May 17, 2019, in Milwaukee. Morry Gash/AP Photo

Toronto Raptors Have Won 17 Of Their Last 18 Games
By Megan Hart
Share:

With almost two months until the NBA Playoffs are set to begin, the Milwaukee Bucks have already clinched their spot. It’s been at least 15 years since an NBA team secured its postseason berth at such an early date, according to Elias Sports Bureau.

After an overtime win Monday against the struggling Washington Wizards, the Bucks are on the road Tuesday to face the Toronto Raptors.

The Raptors knocked the Bucks out of the playoffs in the Eastern Conference Finals last year. The Raptors were led by Kawhi Leonard, who averaged 30 points per game in the series. Leonard left for the Los Angeles Clippers during the offseason. Despite the loss, Toronto still appears to be Milwaukee’s toughest conference opponent heading into the home stretch of the regular season.

The Raptors, who are sitting second in the Eastern Conference behind the Bucks, have won 17 of their last 18 contests. They beat the Indiana Pacers on Sunday by 46 points, the largest margin of victory in franchise history. Guard Kyle Lowry is coming off his sixth straight double-double. On the other end of the court, they’re ranked No. 2 in the league in team defense, behind the Bucks.

The Raptors are on pace to win 57 games — 11 more than analytics website FiveThirtyEight predicted them to tally before the start of the regular season. They’ve demonstrated their depth as key players have missed time with injuries this season. Center Marc Gasol is sidelined with a tight hamstring.

The Bucks are on pace to win 66 games.

The Bucks beat the Raptors 115-105 when they met at Fiserv Forum in November. Reigning MVP Giannis Antetokounmpo had 36 points for the Bucks, but his team struggled to close out the game. Despite leading by as many as 26 points, Milwaukee still allowed Toronto to pull within four several times in the fourth quarter.

The Bucks have three regular season games remaining against the Raptors, including Tuesday’s showdown in Toronto. They’ll play consecutive home-and-home games in April.

Going into the regular season, many experts predicted the Philadelphia 76ers to pose the biggest threat to the Bucks in the Eastern Conference. The 76ers did give the Bucks a shock when they beat them 121-109 on Christmas, but since then Milwaukee has put up two dominant performances against Philadelphia.

When the teams met Saturday at Fiserv Forum, the Bucks won 119-98. Point guard Ben Simmons left that game in the first quarter with a back injury. He’s expected to miss extended time, which spells further trouble for the 76ers.

The Boston Celtics are currently third in the Eastern Conference. Milwaukee is 1-1 against Boston this season. They meet at Fiserv Forum on Thursday, March 12.