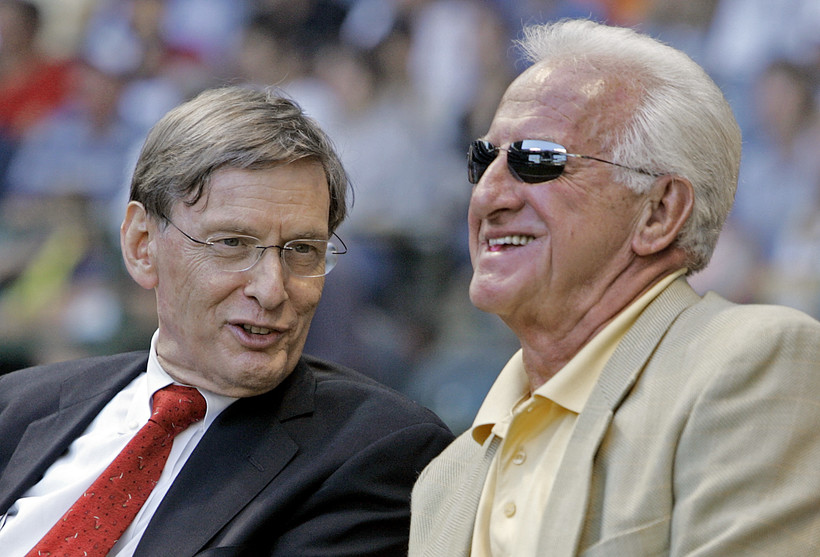 For Milwaukee Baseball Legends, It All Comes Back To The Game

It’s easy to believe Milwaukee baseball legends Bob Uecker and Bud Selig were destined to end up in their respective career paths.

Uecker is a natural jokester, the Milwaukee Brewers announcer since 1971. Selig is the commissioner emeritus of Major League Baseball, recognized as one of the best in the business.

But their career paths weren't straight and narrow.

Uecker, for one, started out as a professional baseball player for the Brewers, Phillies, Cardinals and Braves. A below-average player, he said he would sit in the bullpen with his teammates, sometimes announcing the games to make them laugh.

"I'd ... make things up then as to the game that I was watching or participating in, and then it just went on from there," he said. "As long as it made people laugh. If it made them laugh, I went on."

But he was hired as a scout for the Brewers before he even became an announcer.

"He says, 'Your guy, Uecker,'" Selig recalls. "I said, 'Yeah, he's up in the Northern League scouting, for you, Frank.' He said, 'I know, and here's his first scouting report, it had mashed potatoes and gravy all over it.'"

"Buddy's never forgotten that. He uses that all the time," Uecker said. "One of the players that I got gravy on his report, we later on drafted him. His name is Bob Galasso, he’s a pitcher. So, the report was alright, and the gravy and everything was alright too."

Uecker was hired on as a Brewers announcer just a year later.

Selig wasn't instantly a success, either. He grew up loving baseball, but knew he wasn't good enough to play professionally.

"When I was a kid, I was a Yankee fan, a Joe Dimaggio fan, and I thought I'd be his replacement," Selig said. "But I couldn't hit a curveball, and they had a guy named Mickey Mantle."

He also loved politics and history, and said he could have been a teacher or a politician. He now teaches a history class at the University of Wisconsin-Madison — something he said he wanted to do since he was a student there.

"Both Jerry Reinsdorf and (U.S. Sen.) George Mitchell, both said, 'You should've been the Senate Majority Leader,'" Selig said. "And I regard that as a great compliment."

Once in baseball, Selig worked for years to keep baseball in Milwaukee after the Milwaukee Braves left, finally bringing the Seattle Pilots to the city in 1970.

Selig became acting commissioner of baseball in 1992 before becoming official commissioner in 1998. Some credit him for leveling the baseball playing field — since 2001, every team has played in the postseason, what he calls "restoring hope and faith."

But he said one of the most important events in baseball during his career was April 15, 1997, the day that baseball retired Jackie Robinson's number.

"I would say to you as a history buff … that was the most important day in baseball history," he said. "It was a magnificent story, which proves again my theory about baseball being a social institution."

Uecker and Selig have each been involved in baseball for over 60 years. Even still, they say, they love their jobs.

"It gives me a chance everyday to talk to people ... I'm not talking to an audience, I’m talking to an individual and trying to explain the game," Uecker said. "There were times when these other opportunities came along to move on someplace else. I never needed that. I didn’t want that."

It all came back to baseball. For Selig, too.