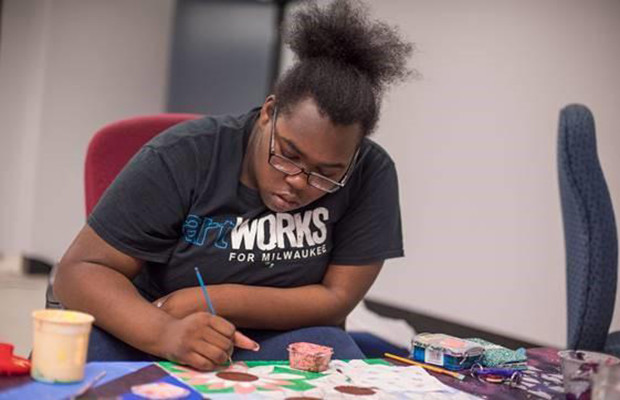 Ashanti Weeks, one of the interns for ArtWorks for Milwaukee, works on murals for the North Basin Project, adding local art to a recently-developed storm water basin. Photo courtesy of Kristen Fledderjohn

Andrew Nash didn't consider himself much of a painter.

But a project to beautify a storm water basin in the Milwaukee Garden Homes neighborhood has turned him and a group of other interns into public artists.

The North Basin Collaborative project, that began in April, brought together the interns, ages 15 to 18, who all have a connection to the Garden Homes neighborhood, said Kristen Fledderjohn, program manager for ArtWorks.

"It's right in the heart of the inner industrial core of historic Milwaukee," Flogel said of the Garden Homes neighborhood. "It's a lot of heavy industry and residential housing that boomed in the late 1800s and early 1900s. Everything's really jammed in there and the water doesn't know any different."

A 6-by-3-foot mural erected in the storm water basin in the Garden Homes neighborhood in Milwaukee features symbols and icons of the neighborhood. Photo courtesy of Kristen Fledderjohn

Development of the basin, which required removal of pavement and homes severely damaged by flooding, was completed in June, Flogel said.

Fledderjohn said the sewerage district began talking to residents about what they wanted to see done with the basin after a major flooding event a few years ago, and the response was overwhelmingly in favor of art and gardens.

The sewerage district connected with ArtWorks, who recruited multimedia artist Blanche Brown to lead the project. To flesh out ideas and themes for the murals, the interns engaged with community members for input.

The proposal was then presented to the sewerage district for approval.

"It's good to get input from the community and not just to assume that you know what they want," she said. "When the youth went around and canvassed the neighborhood and talked to residents, that was the key to understanding what was needed and what we would like to do for artwork."

Fledderjohn said the interns knocked on 88 doors of residents who lived closest to the north basin site, with about 30 percent of them responding. Combined with other interviews and input from the interns, data was collected from 33 people with a connection to the area, she said.

On Friday, the four murals were placed on six-by-six-inch posts permanently secured in turf on the basin that overlooks natural vegetation and is in full view of visitors to the area, Flogel said.

Three murals, varying in size from 4-by-4 feet to 4-by-8 feet were set up in the north basin, each with bold-face lettering on them that read "peace, pride and unity."

"Our murals were based on the ideas of peace, pride and unity because the neighbors were really interested in promoting those strengths and bringing positivity to the neighborhood," Nash said.

The final mural features ties to their neighborhood, with artistic displays of homes, a local icon and the Garden Homes park.

Fledderjohn said she hopes the organization can work with the sewerage district on upcoming projects. Nash had the same response.

"I really like to get involved in new experiences and see all the nuances involved in different things that I never thought I'd be a part of, and so getting to go even further with this would be awesome," he said.

"I think the neighborhood is excited about it, and we are too," he said.