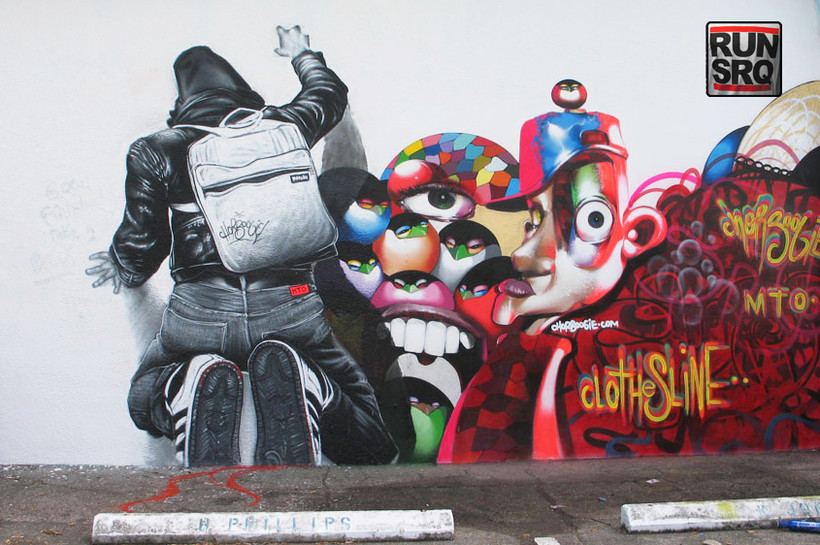 Milwaukee Alley To Be Home To An Outdoor Gallery, Festival

A group of artists will get a canvas that stretches about two blocks in Milwaukee come this September.

The architectural makeup of Wisconsin's largest city might not make it the first place that comes to mind when one thinks of street art  -- Milwaukee doesn’t have many alleys -- but it has still managed to inspire a group of artists who will create a mural on Milwaukee’s east side.

According to Stacey Williams-Ng, program director of Black Cat Mural Alley in Milwaukee, the space between Farewell and Prospect Avenues has long been eyed as a home for street art by artists.

"It’s not a new idea," she said. "A lot of people have wanted to put art in this alley for a long time. I guess it’s just got good bones."

The painted alley will be part of a broader cultural trend towards graffiti, a medium that was once mostly regarded as the guerilla art of clandestine artists.

"Street art is a pretty major art movement that’s going on right now. I even heard someone say that this is bigger than the Renaissance was in Western Europe, and I really don’t that’s an overstatement if you look at sheer volume," Williams-Ng said, adding that for anyone that follows street art on Instagram or Twitter, new work might pop up in one’s feed every few minutes, even seconds.

Milwaukee’s Black Cat Mural Alley in particular, will pop up over the course of a week, and part of that week the alley will be converted into a festival ground as street artists paint their work onto the alley walls. After the installation is done, the space will be an open air gallery featuring several different kinds of art in one place.

"It’s not meant to be one big mural that everyone collaborates on … each individual artist is going to do a piece and they’re all going to be recognized for their piece. Just like if you went into an art gallery and saw a group show," Williams-Ng said of the mural. "We're not going to try and make it elegant, and all fancy and knitted together at all. It’s really meant to be an expression of each artist."

Milwaukee’s Black Cat Mural Alley will be installed from Sept.12 to Sept. 18, with a festival behind the Oriental Theatre on Farwell Avenue and Colectivo Coffee on Prospect Avenue.  The street festival is planned for Sept. 17 to Sept. 18.