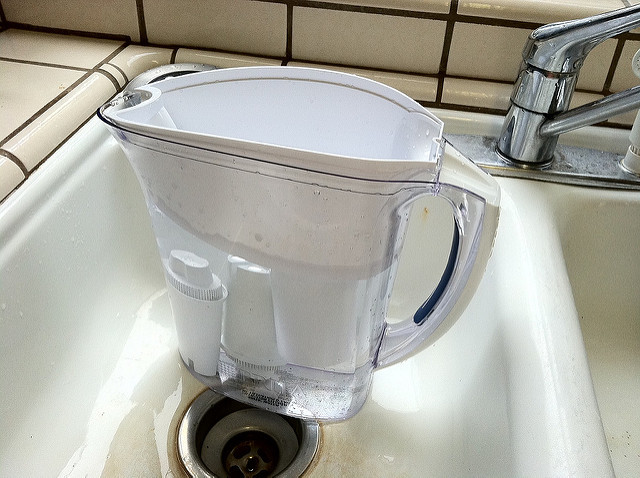 A Milwaukee alderman wants local officials to consider limiting lead service line replacements and instead adopting a short-term surge of the distribution of water filters.

Without replacement, these pipes can deliver tainted water to homes. In 2017, Milwaukee began focusing on replacing its more than 77,000 lead service lines. But with limited resources, progress has been slow.

Estimates from the Milwaukee Department of Public Works this year projected the full cost of replacement could run upwards of $1 billion and take more than 75 years to complete.

In a paper this week, Alderman Jim Bohl makes the case for limiting pipe replacements to damaged and broken pipes and those that service daycare centers. The paper also encourages the city to take on a filter distribution surge for pipes that aren't replaced.

Some water filters can capture upwards of 99 percent of lead from tap water. They’re also a fraction of the cost of replacing lead pipes. Bohl said that means the city can reach thousands of more families much more quickly.

By his estimates, more than 48,100 families could have access to water filters in four years under an annual budget of $3.9 million.

His proposal suggests providing families with starter pitchers that could hold up to 30 cups of filtered water. It also budgets for supplying homes with annual cartridge replacements.

"I think that we need to maximize the safety of lead in water in a short window and ensure that we are getting to the point where we have a habitual use of (filtration)," Bohl said.

He expressed concern over ignoring other sources of lead in Milwaukee, as the conversation of lead abatement focuses on pipes.

"What gets the bang for the buck? Where is paint’s role in all of this?" asked Bohl. "That has seemingly fallen off of a cliff in the discussion."

Milwaukee Water Works cites lead paint as the main cause of lead poisoning in children and the city has a lead abatement program to address lead paint issues. But Bohl said he worries the media coverage and political conversations surrounding the issue are leading families to believe lead pipes are the bigger issue.

He is advocating for mass water filter distribution because lead service line replacement doesn’t completely eliminate the threat of a lead getting into a home’s water supply. Lead can make its way into drinking water if the inner lead fixtures in a home aren't replaced, Bohl said.

"You wouldn't spend a lot of money to reduce half a cancer out of your body, knowing that its still going to create a problem," says Bohl, adding that even after pipe replacement a filter may be needed.

Soil can also be a source of lead contamination.

Bohl said he hopes his proposal starts a conversation with city leaders to come up with a complete and comprehensive lead abatement plan.

Marc Edwards is the Virginia Tech professor that helped bring Flint, Michigan residents' lead problem to light. He stressed that the only long-term solution to the lead pipe issue is to replace them.

"The filters serve a useful role in terms of protecting public health until that day comes when lead pipes in Milwaukee go extinct," Edwards said.

Erik Olson, director of health at the Natural Resources Defense Council, has also worked with families in Flint. He says filters are a good temporary measure but timely lead pipe replacements are vital.

"There’s certainly health costs to not replacing (lead service lines)," explained Olson. "There are education costs to having children who have an excess of lead when they’re young and their brains are developing."

A 2010 Pew Charitable Trust analysis found although large-scale lead abatement programs were costly, they had a positive return in benefits. The national report found that lead poisoning increased the costs of health care, special education needs, behavioral problems and direct costs of crime.

Olson said 75 years to replace all of Milwaukee’s lead service lines is too long when the chance of lead exposure only increases over time. For Olson, providing filters is a short-term fix to protect residents from lead contamination while pipes are gradually replaced.