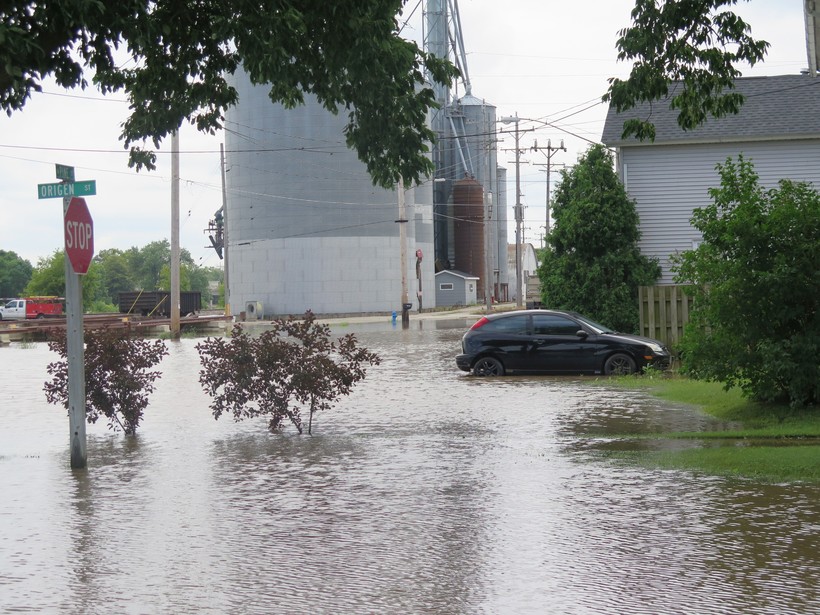 Parts of the streets are still submerged by Wednesday's flooding in Burlington, Wisconsin, Thursday, July 13, 2017. Flooding in the Midwest closed roadways and knocked out power to thousands, including a suburban Chicago hospital that was forced to close, but residents in the Wisconsin city of Burlington appeared upbeat even as portions of streets remained submerged by water Thursday. Ivan Moreno/AP

Current estimates from the Wisconsin Department of Emergency Management put the damage to the state's public infrastructure alone at nearly $22.7 million throughout the southern part of the state. And seven southeastern counties account for more than $8.6 million of that damage.

For Wisconsin residents looking forward to a sunny summer with higher temperatures following the winter, the season has been a bit of a letdown. Climate Watch Wisconsin estimates between June 27 and July 26, some parts of the state saw upwards of 12 inches of rain.

The state is situated in an area of the country prone to thunderstorms, said Jonathan Erdman, a Wisconsin-based senior meteorologist for Weather.com.

"Wisconsin usually sits at the boundary between the really hot, humid air that you typically see, say, in Kansas, Nebraska, and Missouri this time of year," he said. "And the cooler air that our friends up in the (Upper Peninsula) of Michigan and Canada enjoy."

He said these areas, in particular, can see a pattern of clustered thunderstorms known as mesoscale convective systems. In Wisconsin, these clusters have been somewhat common and have managed to hit the same parts of the state multiple times this summer.

Erdman points to Grant County near the Mississippi River and Kenosha County, where Burlington was particularly hard hit, as marking the strip of Wisconsin that has seen the most rainfall. But he said parts of northern Wisconsin, such as Tomahawk, Rhinelander and Eagle River haven't seen nearly as much rain.

Erdman said the first half of 2017 has been the second wettest on record in 133 years. But he said the wet start to the year doesn't guarantee it'll be wet the rest of the year. He said looking at the 2013 weather records — which ranks at the top for the wettest starts of the year — shows the latter half was pretty dry.

"We can't really say what the rest of the year's precipitation is going to be," he said. "It may not necessarily correlate to the wet start. We could easily, by the time we get into the fall and we get those first cold fronts of the year, all of a sudden we could just turn dry. And the pattern could just flip on us."

Whether or not these thunderstorms indicate a larger pattern, Erdman can't say concretely. When it comes to climate change, he said meteorologists and climate scientists can't definitively point to a cluster of thunderstorms to prove the existence of climate change.

"Climate change doesn't cause individual weather events," he said. "But what it does do is contributes to, in some cases, the severity of the event."

But he said climate scientists have seen an increasing number of heavy precipitation events in the upper Midwest since the 1950s.

"We're seeing about a 37-percent increase in these heavy rain days," Erdman said.

Erdman said when the climate warms we have more water vapor in the air. That can mean there's a higher potential for more heavy rain days.

"So, in other words, a day where you might just get a half inch of rain, maybe the changing climate is loading the dice a bit more so you might see out of that similar event, you might see maybe an inch of rain," he said. "Or, two inches of rain becomes three inches of rain. So, the changing climate is starting to load the dice toward an increased chance of these heavy precipitation events. And, unfortunately, that means more flash floods like we've seen."

For Wisconsin counties that have been hard hit by floods, Erdman has some good news that could help the recovery effort. The forecast right now is predicting warmer, drier weather for the next week.