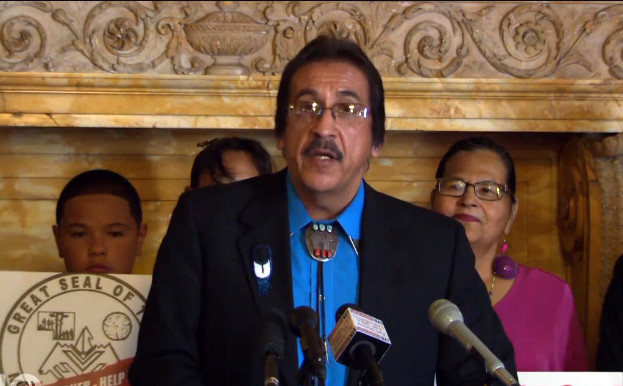 Gary Besaw, shown above at a press conference in Madison in 2013.

Menominee Tribal Chairman Says Growing Hemp Should Be A 'Mandate'

The chairman of the Menominee Tribe said Thursday that the cultivation of industrial hemp should be "a mandate," after the tribe voted in favor of legalizing marijuana in an advisory referendum last week.

In an interview on Wisconsin Public Radio, Gary Besaw said the Menominee are being cautious, and have not yet decided whether to move forward with legalizing marijuana. However, he predicted that at some point in time, the tribe will be growing industrial hemp on their reservation in northeastern Wisconsin.

"When you really look at all of the other various uses that hemp could give, it should be a mandate that you have to grow it, when you look at what it can do and how it can help reverse some of the wrongs that we're doing to our farmland," he said.

The Wisconsin State Assembly is also considering a bill that would legalize hemp. Under federal law, it could only be grown for research.

The Menominee Tribe has been exploring the possibility of marijuana legalization ever since Gov. Scott Walker rejected plans for a major tribal casino in Kenosha. In early February, Besaw and other Menominee tribal members walked 155 miles to Madison to try to convince Walker to change his mind. In the WPR interview, Besaw said he lost respect for Walker after the refused to have a face-to-face with him once the trekkers arrived at the Capitol.

"Had the governor met with me, to look me in the eyes and say,'Chairman Besaw, I'm sorry, I'm still going to say no.' But to not even give that respect of government-to-government communication or to talk to someone's face, I lost a lot of respect," said Besaw.

Besaw said there is a "nexus" between the cancellation of the casino and the tribe's advisory vote to legalize marijuana, because of their need for revenue.