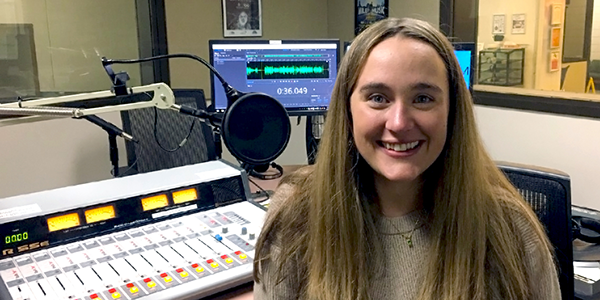 Based in our Green Bay offices but assigned to the whole state, Megan will report on the intersection of sports and society. That could be anything from economics to the environment to race and culture.

"There’s lots of great storytelling in sports," she said, "a lot of really human stories that are of interest to people whether or not they watch ESPN and keep up with all the scores."

She's a former competitive swimmer, she interned at Sports Illustrated magazine and while earning her master's in journalism at Northwestern University, she managed to squeeze in a semester interning for a magazine publisher in South Africa. She's covered the Olympics twice, researching "some really off-the-beaten-path sports" for other journalists and producers. She's extremely excited to come to WPR.

"As a sports journalists, there’s not a higher level to aspire to than covering the Packers," she said. "It feels like an honor."

Megan grew up in Sarasota, Fla., and moved to Wisconsin just over a year ago to work at the Sheboygan Press. Sports reporting has always been her passion, and she’s eager to dig into the Wisconsin scene. She finds Wisconsin uniquely sports-centered.

"There's an almost unrivaled dedication to the Packers here," she said.

Nevertheless, she sees her job as telling challenging or controversial stories, even if that might be disturbing to fans.

Megan has already been on air with stories on Badgers and Packers football. Check out her piece about people protesting the Washington NFL team’s name outside Lambeau Field on Dec. 8.