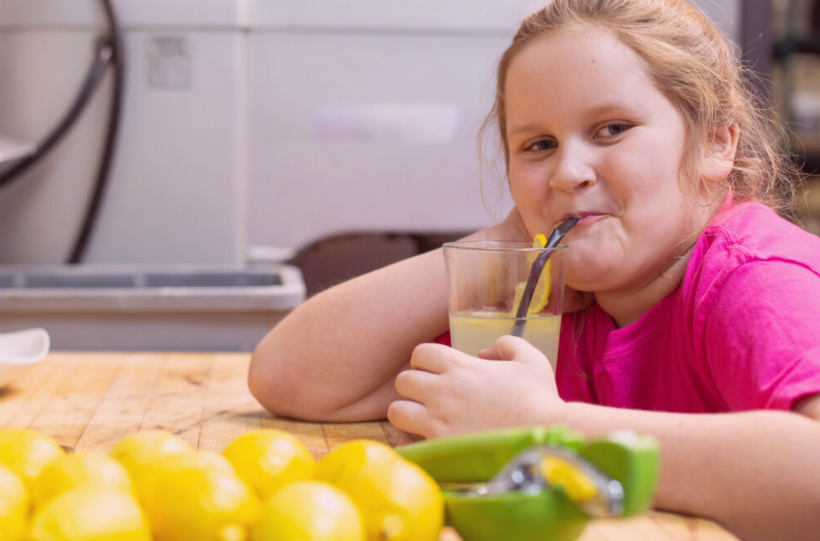 Morgan Marsh-McGlone, 8, who has helped raise more than $50,000 to feed food insecure families during the coronavirus pandemic, will speak during the inauguration special featuring Bruce Springsteen, Kareem Abdul-Jabbar, Lin-Manuel Miranda and others. Photo courtesy of Green Clock

Meet The Wisconsin 8-Year-Old Speaking At The Inauguration Special

Morgan, an 8-year-old from Wisconsin, might not be a household name yet, but she’s set to appear alongside some of America’s biggest stars, including Demi Lovato, Justin Timberlake and chef Jose Andres, on Wednesday during "Celebrating America," the primetime culmination of the inauguration of President Joe Biden.

Morgan will be honored for her contributions amid the coronavirus pandemic — her virtual lemonade stand has raised more than $50,000 for a Madison-area nonprofit that works to address food insecurity.

"My dream is basically just to, like, help a lot of people since that is what I really like to do," Morgan said. "I love to help, and when you help, you get, like, this feeling that even though you’re not doing anything for yourself, you’re still happy because you’re helping and making people’s lives better."

Morgan’s vision for a lemonade stand came before the pandemic, when she was struck by the wildfires in Australia. According to her website, she and a friend devised a plan to raise money for the kangaroos. Morgan’s mom advised she wait until spring, when refreshing lemonade would be an easier sell in Wisconsin. But then the coronavirus pandemic arrived, and schools closed.

According to Morgan’s website, she knew some of her classmates relied on the meals provided at school, and she wanted to do something to help. Morgan and her mom decided to move forward with a virtual fundraiser, mailing a lemonade voucher — to be redeemed after the pandemic — to everyone who donated. After some consideration, Morgan decided the donations should go to Little John’s Kitchen in Fitchburg, near Madison.

The nonprofit was envisioned as a pay-what-you-can restaurant, but the pandemic revealed the cracks in the American food access system, said creator Dave Heide.

"First you see that 40 percent of all food produced in the United States is thrown away, and then you see how many people are starving, and then you see all of these places that are really trying to make an impact, but they're doing it at a small scale," he said.

Early in the pandemic, Little John’s partnered with Reach Dane to make sure area children were getting the food they need. Now, the organization is planning to build a 26,000-square-foot commissary to make sure everyone in Dane County has access to quality meals, Heide said.

If there’s a positive to come out of the pandemic, it could be that people who never expected to struggle with challenges like food or housing insecurity are beginning to understand they can threaten anyone, he said. Access to things like food and health care shouldn't be political issues, he said.

"I think there's a lot of people now who see how important it is to have systems in place to help support and cushion you when you fall," he said.

Morgan didn’t expect to receive so many donations, she said. Originally, she hoped to raise $90 for Little John’s. 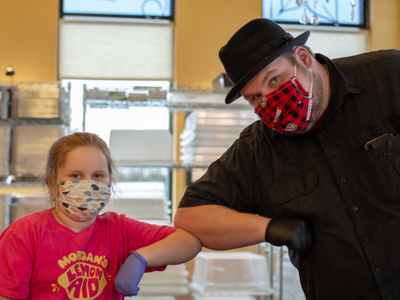 Morgan Marsh-McGlone bumps elbows with Dave Heide, executive director of Little John's Kitchen in Fitchburg. The 8-year-old has helped raise more than $50,000 for the nonprofit during the coronavirus pandemic. Courtesy of Green Clock

She’s since collected more than $50,000, with the help of large contributions from Oregon Community Bank and Collaboration 4 Good, as well as a little ingenuity. Morgan came up with the idea to offer other incentives for people to donate, like a performance by a live band or the chance to pet her new dog, when the physical lemonade stand opens.

Heide said young people like Morgan, Greta Thunberg and his own child Ollie give him hope for the future.

"I see this new generation of people who are just like, 'We're tired of living in your bull----, and we're just going to change the world, and we're going to make it a better place,'" he said, calling Morgan "an incredible force."

Wednesday night’s program "will showcase the American people’s resilience, heroism and unified commitment to coming together as a nation to heal and rebuild," according to a news release from the Presidential Inauguration Committee.

Morgan will be featured alongside five other Americans who made a difference last year, including a Vanderbilt soccer player who became the first woman to score a point in a Power Five college football game, and a New York nurse.