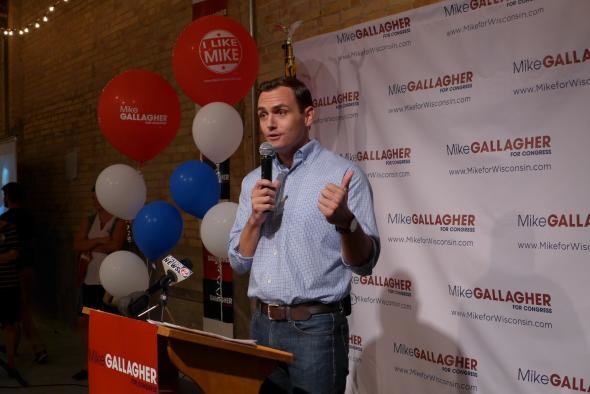 Mike Gallagher served two combat missions in Iraq, has two master’s degrees and a PhD and has worked as an advisor in Washington and to Gov. Scott Walker. Now, the 32-year-old Green Bay native has set his sights on representing Wisconsin’s 8th congressional district.

Gallagher is running against Outagamie County Executive Tom Nelson, a Democrat, for the seat being vacated by incumbent Republican Reid Ribble. In August, Gallagher defeated two opponents in the Republican primary.

That night he told a crowd of supporters he's ready for his next mission, "I am asking you to deploy me to enemy territory to impose the values of Wisconsin onto Washington, D.C."

Ribble met the candidate who is hoping to be his successor while Gallagher was working as an adviser on Walker's failed presidential campaign. Ribble, who has since endorsed Gallagher, said he was immediately impressed.

"I met him and I'm like, 'wow for such a young man he's really smart,’” Ribble said, noting he didn't realize then how many degrees Gallagher has to his name. “At that point I didn't know he had two master’s degrees and a PhD, but it was pretty evident he was a highly educated guy."

Gallagher's PhD is in International Relations, but he says his true passion and expertise is in early cold war history. He spent time at the Eisenhower and Truman presidential libraries researching a 500-page dissertation, which he titled "Changing the Course; the Sources of Strategic Adjustment."

"That period where we really built the national security community in order to deal with the long term threat posed by the Soviet Union from 1947 onward has always fascinated me, how men of good faith, on both sides of the aisle, came together to oppose an urgent threat," he said.

Gallagher said some of those same threats are reappearing, "we're sort of operating under or using some of the same structures today that were built back then and I think the time is long past for us to have a similar reassessment and look at some of the threats we're facing."

Gallagher isn't all scholar though, he said he reads history books in his off time. He also plays guitar and likes to socialize with friends and family. His political role model is Abraham Lincoln. Gallagher said he's always admired the "warrior-scholar" model.

He admits he can sound like a "nerd," but if he is supporters like Ribble don't seem to care. Ribble said Gallagher seems like the real deal, "I can't find a flaw in this guy. It's what bothers me."

When he was first elected six years ago, Ribble self-imposed a term limit. Gallagher won't make a similar promise, and gives every indication he's eager to enter Congress, even though he calls it a "deployment" and not a career path.