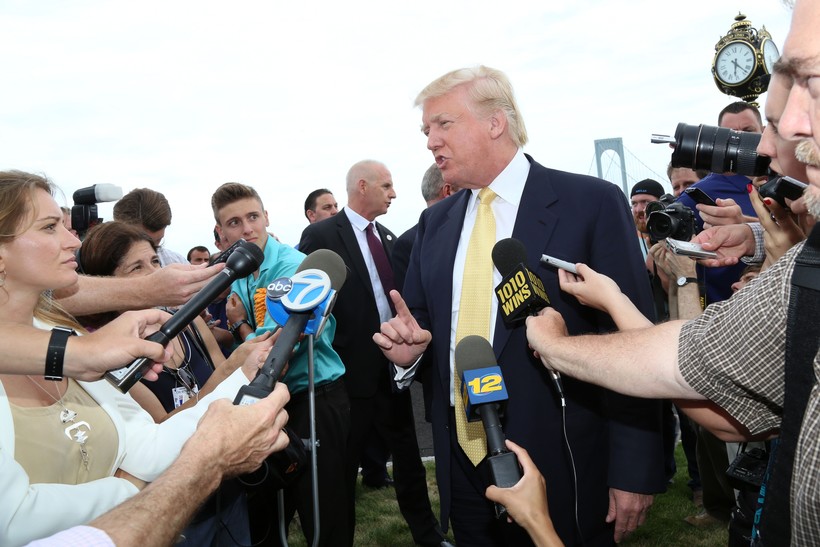 It's been the journalistic quagmire of the season: How do political reporters cover Donald Trump's campaign as the Republican presidential nominee clearly tests their standards of objectivity and balance?

New York Times media columnist Jay Rutenberg put it this way: "If you’re a working journalist, and you believe that Donald Trump is a demagogue playing to the nation’s worst racist and nationalistic tendencies, that he cozies up to anti-American dictators and that he would be dangerous with control of the United States nuclear codes, how the heck are you supposed to cover him?"

The model has long been that political reporters wrote stories with the hope that readers wouldn't know how he or she voted, said David Mindich, a media studies professor at Saint Michael's College in Vermont.

After months of holding back, journalists are now increasingly forsaking notions of objectivity and "pushing explicitly against" Trump, Mindich added.

Mindich is calling it a "Murrow moment," a reference to CBS broadcaster Edward R. Murrow, whose very name, along with Walter Cronkite, evokes high-standards of ethics and integrity, as Murrow broke standards when reporting on Republican U.S. Sen. Joseph McCarthy from Wisconsin.

"So what we're really seeing now is a departure, and I would argue that really hasn't been seen since 1954, when Murrow was very specifically criticizing McCarthy in his show," Mindich said.

Some of the more well-known departures include Megyn Kelly's line of questioning at the first Republican debate, Anderson Cooper calling Trump's response the "argument of a 5-year-old" and Tom Brokaw's appearances on NBC Nightly News in which the longtime anchor broke protocol to call Trump's comments "un-American."

David Folkenflik, National Public Radio news media columnist, said there's been some substantive coverage of Trump from the beginning, but media outlets have mostly covered him like a live sporting event, fixated by the fact that anything could happen next at a rally.

It's no wonder, said Folkenflik, that CBS President Leslie Moonves said of Trump's candidacy, "It may not be good for America, but it's damn good for CBS."

Journalists should be examining the implications of Trump's rhetoric and teasing out the seriousness of his proposals and scrutinize his business record in the same way they vet a politician's voting record, Folkenflik said.

"I think the press didn't do that sufficiently, didn't give Republican primary voters enough substance to work with as they made their own decisions on the ballot box," Folkenflik said.

Watch video of Murrow speaking on McCarthy's committee in a broadcast dated March 9, 1954: