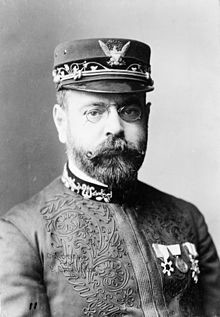 The Meanest Thing in My Life

During San Francisco’s midwinter fair in January 1894, the Sousa band was asked to perform in conjunction with Scheel’s Imperial Orchestra, which had been playing in a large auditorium to meager audiences, even as the Sousa organization was drawing crowds by the thousand.

The concert was to consist of two pieces by the combined ensembles, two by the ensembles playing separately, and two by soloists from each ensemble. Sousa met with Fritz Scheel, conductor of the Imperial Orchestra, who, apparently, had been told that Sousa would dominate the proceedings if left unchecked.

“What is your piece for the combined orchestra and band?” Scheel asked.

“Nein, nein!” Scheel protested. He wanted to conduct it.

They got pretty hot under the collar arguing about the piece until the publicity man for the fair convinced Sousa to let it go.

Scheel asked, “What is your next piece?”

Scheel wanted that, too. “What is your opening piece?” he asked.

Sousa turned the tables and asked Scheel what his was. When told it was the overture to Mignon, Sousa laid claim to the William Tell Overture.

By the time of the concert, the inattention of Scheel’s players to Sousa’s conducting stirred up such rancor between the two groups of musicians that the Americans threatened fisticuffs if the slight continued. After polite applause greeted the Scheel orchestra’s performance of Mignon, Sousa’s band played an impeccable William Tell Overture, and, during a thunderous ovation, Sousa did what he called “the meanest thing in my life.” He swept his band into an encore of Americana that ended with a rousing “Dixie” and “Yankee Doodle.”

Scheel later forgave Sousa for upstaging him, and for years afterward, whenever they met, they had a good laugh over the incident.