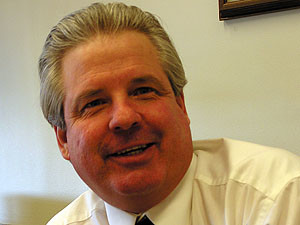 A former mayor who opposed making public statements of support for the gay community has a surprise at the unveiling of his mayoral portrait this week. The portrait shows him with a pink triangle on his lapel.

When Herb Bergson was elected mayor of Superior in 1987, he told local gay pride committee member Bob Jansen that he would not publicly support his community. However, before Bergson left office, he became the first Superior mayor to give Gay Pride Week its own proclamation. Jansen said, "It's nice to see that people can change their minds. And, I hope that's what people can do is change their minds and find out that things are different."

Bergson admits he needed education. When he became mayor of neighboring Duluth 10 years later, he did something previous mayors refused to do: He proclaimed Gay Pride Week. "By the time I was elected mayor in Duluth, I understood. I mean, it's just a no-brainer. Who cares?"

Now a resident of Madison, Bergson says the GLBT community needs support from the straight community. When his official portrait is unveiled this week in Duluth's Hall of Mayors, he will be sporting a pink triangle on his lapel. He knows it will be controversial to a few. "I remember the hate calls I got when I signed the proclamations, when I attended the GLBT events. There are hateful people out there. But, I also expect some positive support from both the gay community and their allies."

Jansen is not sure it will be that severe. He said, "I think the reaction will be 'What's that pink thing? Does it come off? Why is he wearing that?"