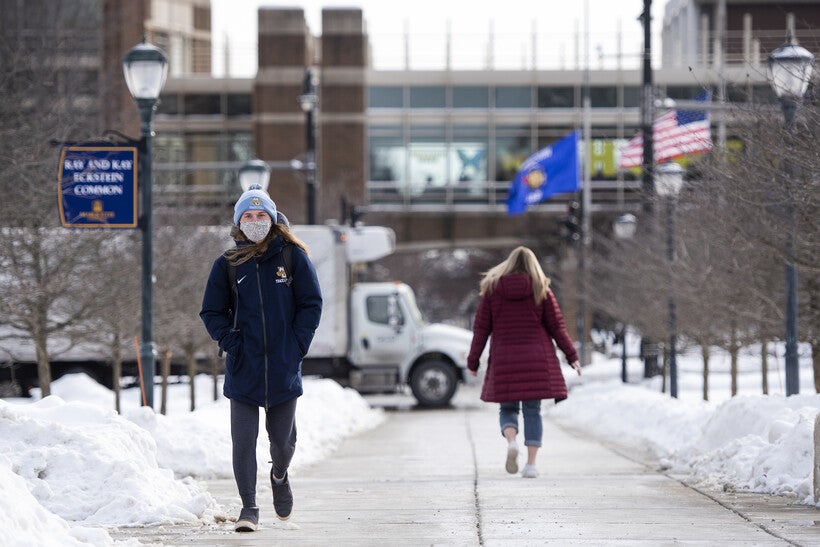 With COVID-19 Cases Dropping And Vaccinations Ramping Up, Administrators Optimistic About Fall
By Rich Kremer
Share:

Marquette University has joined a growing list of Wisconsin universities planning to bring nearly all students back to classrooms and dormitories this fall.

On March 1, Marquette University President Michael Lovell sent a letter to campus announcing that administration was planning for "an in-person academic and residential campus experience" for students this fall.

During an appearance on WPR's "The Morning Show," Provost Kimo Ah Yun said that also means the university plans to have dorms filled to capacity this fall.

"We're quite a ways away from the start of the fall semester. We've had to pivot before, meaning that we intended to do one action, and we had to move to another action," said Ah Yun. "Everything we are planning, we have a plan B in place, and we'll pivot if needed, even though we are months away."

Viterbo University Executive Vice President for Student Success Rick Trietley said the La Crosse-based campus plans to have 90 percent of classes be face-to-face with the rest being a combination of hybrid and online.

"So that's a significant increase from where we were this year, where we were more in line with about 60 percent," Trietley said.

Trietly said he expects Viterbo's dorms to be at 85 or 90 percent capacity.

During a UW Board of Regents meeting Thursday, Thompson said state legislators have been asking him for more in-person classes.

In emails to WPR, communications staff at UW-Madison and UW-La Crosse said campus leaders were planning on filling dorms near capacity. Staff with UW-Stevens Point, UW-Platteville, UW-Oshkosh and UW-Eau Claire said administrators are planning for dorms to be full. A spokesperson from UW-Green Bay said initial plans are for dorms to be left at 75 percent capacity in order to reserve some space for COVID-19 quarantine and isolation.

State Rep. Dave Murphy, R-Greenville, chairs the State Assembly's Colleges and Universities Committee. He said he's told Thompson he'd like to see all classes be taught in-person and all dorms filled with students.

Murphy said he's gotten a lot of correspondence from students and parents who have felt they haven't gotten their money's worth while taking online classes at UW campuses during the pandemic.