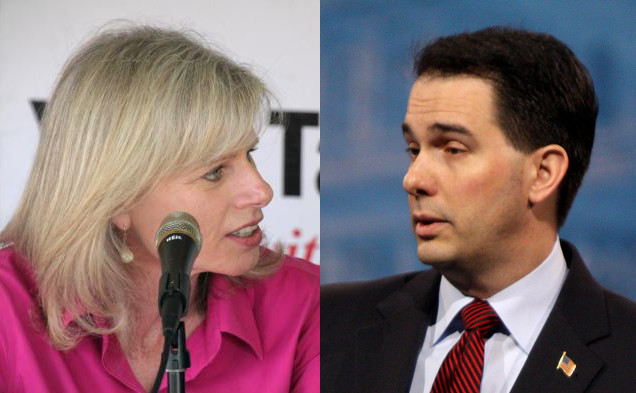 After Walker Pulled Ahead Among Likely Voters In Last Poll, He And Burke Are Now Back in Dead Heat
By Chuck Quirmbach and Erik Lorenzsonn
Share:

Among likely voters, both Burke and Walker polled at 47 percent. Among registered voters, Walker holds a 48 to 45 percent lead that's within the poll's margin of error.

A poll from two weeks ago had indicated that Walker was pulling ahead among likely voters, with a lead that was higher than the margin of error. That advantage has apparently dissapated.

"Independents who have favored Walker in the previous poll by 13 (points) favor Burke by 1 this times," said Franklin. "That's coupled with a surge in their turnout, so that they're now as likely to say they'll vote as Democrats are — who are only slightly behind Republicans now in turnout. I think the big question is, does that maintain itself?"

Franklin said the question looms large since 38 percent of the respondents to the Marquette poll describe themselves as independent. He said with no political party to anchor them to their choices, independents can still be swayed in the closing weeks of the campaign.

"We shifted from, in the previous poll, a lot of very energized Republican men who made up a disproportionate share of likely voters," said Franklin. "Those differences in enthusiasm (are minimized) this time."

Franklin said female Democrats are no longer voting in much larger numbers among likely voters than female Republicans. He added, however, that the gender gap typically varies a lot from poll to poll.

The poll finds that the race for attorney general, remarkably, is even tighter than the gubernatorial contest. Both Democrat Susan Happ and Republican Brad Schimel are polling at 41.5 percent among likely voters. The two candidates are also tied at 39 percent among registered voters.

The poll was conducted last Thursday through Sunday. Exactly 1,004 registered voters across Wisconsin were surveyed over the phone. Of those surveyed, 803 self-identified as likely voters.