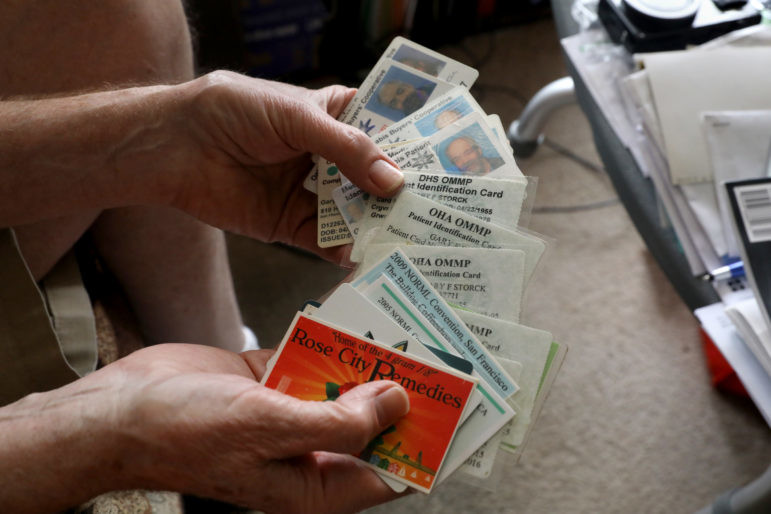 Madison, Wis., resident Gary Storck shows out-of-state medical marijuana cards. Storck uses the cards under an obscure Wisconsin law that allows patients to have a controlled substance with a valid prescription or order from a doctor. Storck uses cannabis to relieve the symptoms of glaucoma. Coburn Dukehart/Wisconsin Center for Investigative Journalism

Gary Storck has been here before.

For decades, Storck, a longtime medical marijuana advocate from Madison, has been pushing the state Legislature to legalize his medicine. Storck suffers from glaucoma. He uses cannabis to slow progression of the disease, which is gradually robbing him of his sight. 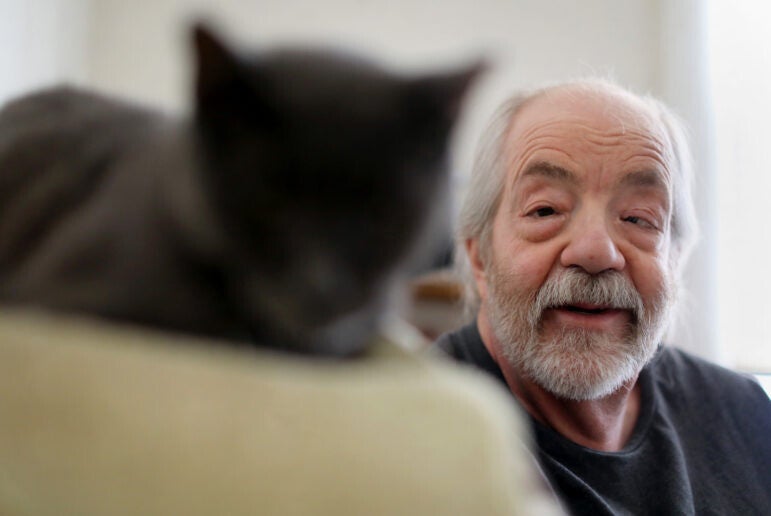 Madison, Wis., resident Gary Storck has suffered from glaucoma since he was a child. When he was a teenager, Storck read that marijuana could relieve the pressure and pain in his eyes, and he has been using it as a medicine ever since. He is seen in his apartment in Madison with his cat, Roy, on March 20, 2019. Coburn Dukehart/Wisconsin Center for Investigative Journalism

The first big moment was in 2002, when statewide polling found that 80.3 percent of Wisconsinites supported medical marijuana. Storck was ecstatic. When he first heard the numbers, "I jumped in the air about a foot, I think. I was so happy to see that level of support."

Storck was convinced that this would be the moment to finally legalize medical marijuana. Volunteers from Is My Medicine Legal Yet?, a group that Storck co-founded, placed copies of the polling results in every office at the State Capitol.

"We thought, they see this, they’re going to pass it," Storck said. "Well, it didn’t happen." A bipartisan bill sponsored by former Republican Rep. Gregg Underheim of Oshkosh did not make it out of committee.

In 2009, Wisconsin Democrats swept into power and took control of the governor’s office, the Assembly and the Senate. Medical marijuana was back on the table, with help from politicians including Sen. Jon Erpenbach, D-West Point. Political support seemed to be on the upswing.

That year, a public hearing was held. "People came from all over the state," Storck said. "It was an eight-hour, standing-room-only public hearing. A lot of patients, they drove so far, and they were waiting and waiting, and they had to leave."

"It seemed like the stars had aligned for us," Storck said.

But the bill, unable to garner enough bipartisan support, never got a vote. Powerful interests, including the Wisconsin Medical Society and the Wisconsin Department of Justice, were opposed.

While Wisconsin’s laws on marijuana have stayed largely the same — and federal law continues to ban use and sales — bordering states have begun to move on the issue. Illinois, Michigan and Minnesota have all legalized medical marijuana, with Michigan also legalizing recreational use in 2018.

Overall, the medical use of cannabis is legal in 33 states, along with the District of Columbia and several U.S. territories. Recreational use is legal in 10 of those states plus D.C. A legalization push in New Jersey, which is controlled by Democrats, recently failed after lawmakers could not reach consensus.

If Illinois were to legalize recreational marijuana — which newly elected Democratic Gov. J.B. Pritzker lists as one of his top priorities — Wisconsin residents could drive a short distance for an over-the-counter purchase. With such easy access, Storck said, "I don’t know how long prohibition can last."

"The reason I say it’s coming is that pretty much across the state, law enforcement has de-emphasized marijuana enforcement, particularly for possession," said Chisholm, a Democrat. He noted that in many areas, police officers prefer to give tickets rather than arrest those caught for possession of small amounts of marijuana.

Evers also has said he would consider legalization of recreational use if voters approved it in a statewide referendum.

Evers’ proposals have been lauded by Democratic state legislators — and even some top law enforcement officials — who have seen support for legalization grow in Wisconsin in recent years. In January, a Marquette Law School Poll found that 58 percent of Wisconsinites believe marijuana should be legalized and regulated like alcohol, with 36 percent opposed.

In November, local advisory-only referendums in support of marijuana legalization were passed in large numbers across the state, including 16 counties and two cities. Whether the question was about medical or recreational marijuana, no measure passed with less than 60 percent support, and no measure was rejected. 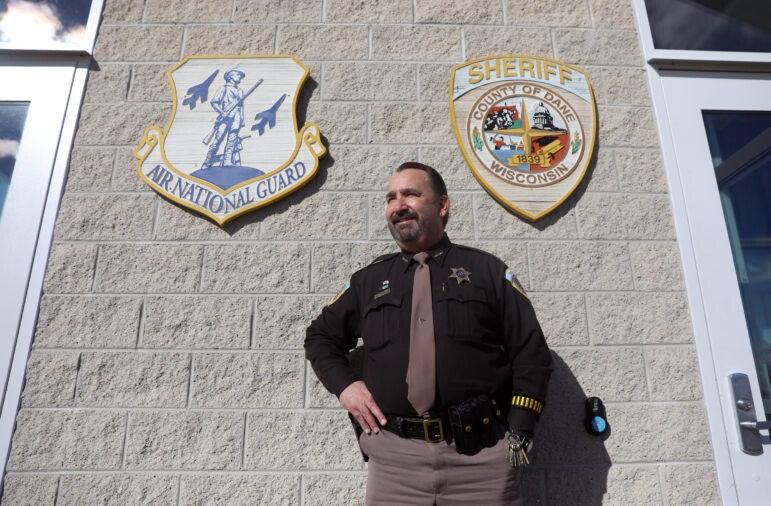 Dane County Sheriff Dave Mahoney favors decriminalizing possession of small amounts of marijuana and legalizing cannabis for medical uses. But he opposes full legalization until more studies are done about its effects in other states. Coburn Dukehart/Wisconsin Center for Investigative Journalism

While Mahoney, a Democrat, has no problem with residents of Dane County who are "smoking a doobie," he said statewide law enforcement groups would oppose legalizing marijuana for recreational use. Mahoney said he has moved toward the center of the legalization debate — in part because members of his family use cannabis medicinally — but he does not support recreational marijuana at this time.

Evers’ plan has also been endorsed by other Wisconsin top law enforcement officials, including Chisholm, who believes that the proposal could help to reduce disparities in how marijuana possession is treated around the state.

"I think that what the governor’s attempting to do is just saying, 'Look, major sections of (local) ordinances allow less than 25 grams to be a ticket (rather than a crime),'" Chisholm said. "Why not just incorporate that into the state law, and that does away with some of the unequal enforcement rates."

GOP Leaders Not On Board

The governor’s proposal "makes it easier to get recreational marijuana and provides a pathway to full legalization, which I do not support. I’m open to medical marijuana when it’s prescribed by a doctor but it has to be done in a targeted way without allowing recreational use," Vos said in a statement.

In an email, an aide to Senate Majority Leader Scott Fitzgerald, R-Juneau, reiterated his previous positions in opposition of legalization. Fitzgerald also has been quoted as saying he does not believe that there is enough support within the Republican-controlled Senate for movement on the proposals.

And there are groups, including Smart Approaches to Marijuana, that would likely mobilize if Wisconsin proposes legalizing the drug for recreational use. SAM spokesman Colton Grace said the group pushes for alternatives in states considering legalization, including allowing medicinal uses as approved by the U.S. Food and Drug Administration.

An important provision of the proposals is the legalization of medical marijuana, which Evers says was influenced by his experience as a cancer patient. Evers beat esophageal cancer about 10 years ago. Some cancer patients use marijuana to combat nausea from chemotherapy and to curb cancer pain.

Alan Robinson, executive director of the Wisconsin chapter of the National Organization for the Reform of Marijuana Laws (NORML), said he uses cannabis to reduce symptoms of anxiety and depression and post-traumatic stress disorder, or PTSD, which he developed after the drug overdose death of a close friend. 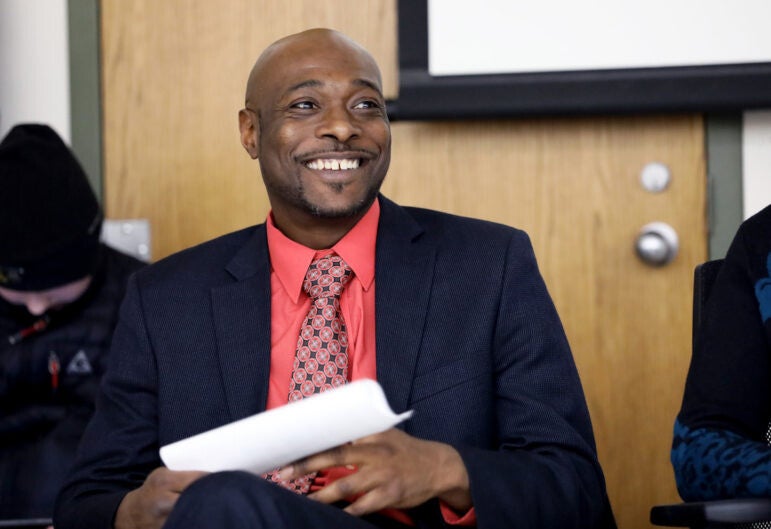 Alan Robinson, executive director of the Wisconsin chapter of the National Organization for the Reform of Marijuana Laws, says his organization is expanding and opening new chapters in the state. Coburn Dukehart/Wisconsin Center for Investigative Journalism

"It wasn’t until a friend urged me to smoke weed that I began to feel some relief," said Robinson, who sports dress socks featuring marijuana leaves. "This was the first time that I had slept the whole night through in years, and it was life-changing."

Currently, the FDA has approved only one drug, Epidiolex, that contains an active component of marijuana. Epidiolex is used to treat seizures related to two rare syndromes. Three other FDA-approved drugs, Marinol, Syndros and Cesamet, contain synthetically derived components. Marinol and Syndros are approved to prevent weight loss in AIDS patients, while Cesamet treats nausea and vomiting in cancer patients undergoing chemotherapy.

Greg Kinsley is a medical marijuana advocate with Crohn’s disease, an inflammatory bowel disease that can cause abdominal pain and severe diarrhea. In 2014, Kinsley used a doctor’s note to avoid possession charges under an obscure Wisconsin law that allows patients to have a controlled substance with a valid prescription or order.

Kinsley believes it is time to legalize.

"We are a country of laws," Kinsley said. "If the law’s not quite right, we as a people need to change that."

Rep. Melissa Sargent, D-Madison, says she has never used marijuana. But Sargent has become the face of marijuana legalization in the past three legislative sessions. She has introduced legalization bills after hearing stories of the medical benefits that constituents have experienced and the negative consequences of marijuana-related arrests and convictions.

"I very quickly realized that the most dangerous thing about marijuana in Wisconsin was that it was illegal," Sargent said. 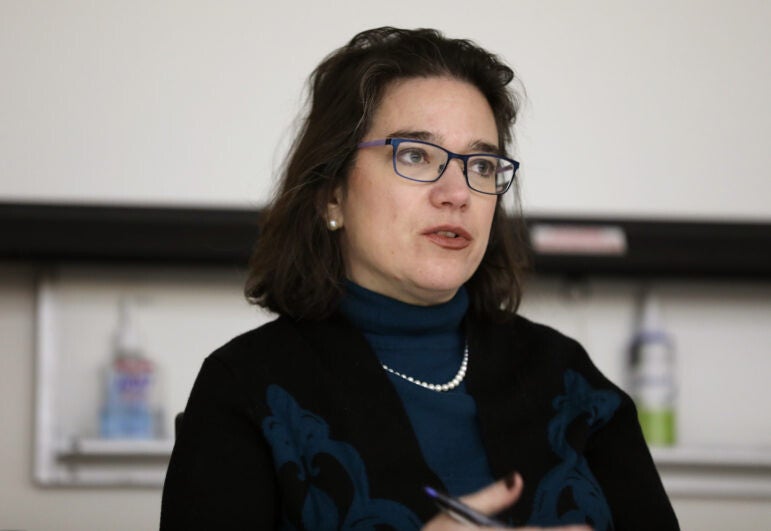 State Rep. Melissa Sargent, D-Madison, introduced bills to legalize marijuana in Wisconsin each of the past three legislative sessions. Sargent says she has heard from many constituents of the benefits of using marijuana and the harm of marijuana-related arrests and convictions. Coburn Dukehart/Wisconsin Center for Investigative Journalism

This year, Sargent is working on a new bill that she said will go beyond Evers’ proposals and call for full legalization for both medical and recreational marijuana. As with Evers’ plan, Sargent’s bill would also allow nonviolent offenders to wipe marijuana-related possession convictions from their records "in ways that they currently cannot."

When asked what he would say to lawmakers in Wisconsin in a 1-minute pitch for legalization, Robinson responded: "I would definitely try to impress on them that cannabis is likely more popular in their district than they are."

Sargent agreed: "People across the state of Wisconsin are far ahead of policymakers when it comes to this piece of legislation."

Chisholm believes Evers’ proposal represents "an opportunity to educate everybody — even the people that are adamantly opposed to it."

People like Storck, who have long been waiting for legalization, hope that 2019 is not a repeat of the past.

"The push for medical may be a step too far for some, as well as the proposed decriminalization, but these issues have majority popular support, and I hope the GOP will listen to the will of the people," Storck said.

This story was produced as part of an investigative reporting class in the University of Wisconsin-Madison School of Journalism and Mass Communication under the direction of Dee J. Hall, the Wisconsin Center for Investigative Journalism’s managing editor. The Center's collaborations with journalism students are funded in part by the Ira and Ineva Reilly Baldwin Wisconsin Idea Endowment at UW-Madison. The nonprofit Center (www.WisconsinWatch.org) collaborates with Wisconsin Public Radio, Wisconsin Public Television, other news media and the UW-Madison School of Journalism and Mass Communication. All works created, published, posted or disseminated by the Center do not necessarily reflect the views or opinions of UW-Madison or any of its affiliates.

The Cannabis Question is a series by the Wisconsin Center for Investigative Journalism exploring questions about proposals to legalize marijuana in Wisconsin. This is the first installment. Additional stories will be published throughout  the year.

Do you have a story to tell? Contact us at tips@wisconsinwatch.org.