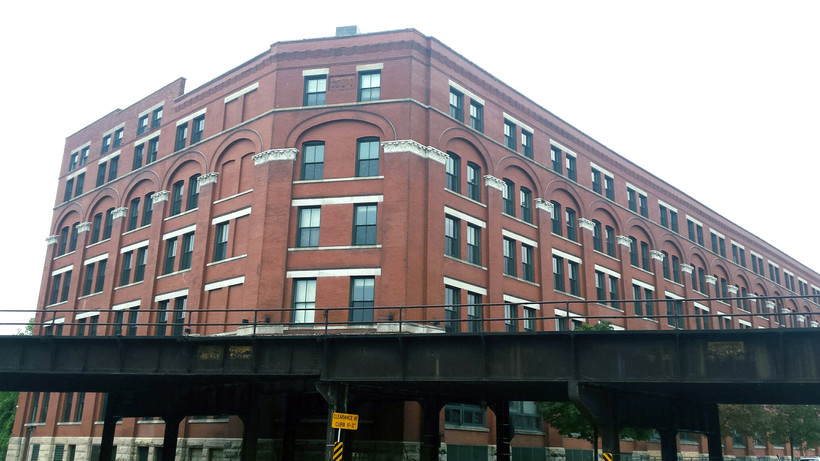 The 99-year-old bridge in downtown Milwaukee, and behind it, the apartment where Brian Chiu lives.

For Many, 'Rusty The Rail Bridge' Exemplifies Danger Of State's Aging Rail Infrastructure A birthday cake that CARS made for "Rusty the Rail Bridge." Chuck Quirmbach/WPR

Old and rusting railroad insfrastructure is a big reason why some Wisconsin residents are voicing concerns over a growing number of potentially explosive trains traveling through the state — infrastructure like one 99-year-old bridge in downtown Milwaukee that had a birthday celebration of sorts over the weekend.

The Milwaukee Journal Sentinel reported Monday that Canadian Pacific railroad intends to upgrade the nearly century-old bridge by First and Oregon streets this fall. The structure, which several oil trains roll across on a weekly basis, will have its columns reinforced in concrete.

The bridge has been in the spotlight ever since a television news investigation raised concerns about corrosion and cracks in its deck and support beams. After a citizens group criticized Canadian Pacific — the owner of the bridge — for not sharing its inspection reports, the Federal Railroad Administration took a look at the bridge in mid-July.

The agency has yet to release its findings, but a Canadian Pacific spokesperson said that the inspection found the bridge to be safe. The company says it will nevertheless update the bridge in order to prolong its life.

The group Citizens Acting for Rail Safety had been working to call attention to the bridge’s condition and to encourage the FRA to share its information. Just this past weekend, some of the group's members gathered in front of the bridge to act out some street theater — more specifically, to throw 99-year-old "Rusty the Rail Bridge" a birthday party.

As part of the performance, a woman dressed like the conductor from the Thomas the Tank Engine stories had a conversation with a man playing "Rusty" as a small crowd of other CARS members looked on.

"I'm thinking of hanging up my tracks, but the bosses will probably keep me going until I fall apart!" proclaimed Rusty, who spoke into a microphone from the shadows under the bridge.

Brian Chiu, who lives in a loft apartment just a few hundred feet from the railroad bridge, helped organize the production. Chiu said that if the structure fails and a tank car of crude oil falls off the track, he worries he wouldn't be able to get out of the blast zone before an explosion.

"The first thing I worry about is my immediate safety," said Chiu. "I have a few minutes to clear half a mile, and I don't know how I'm going to do that. I'll be on fire as I run toward the Milwaukee River, I guess."

Canadian Pacific says that it's taking more steps to limit oil train fires. During a recent training exercise, Milwaukee firefighters sprayed non-toxic foam on large rocks at Canadian Pacific's rail yard just west of downtown, using a mobile fire trailer that the railroad had lent to the Fire Department. The trailer is meant to be used if a train fire is too far away from a hydrant, or is in a location too difficult for a fire truck to reach.

"We have procedures in place to ensure that safety is considered in everything that we do," said Cummings. "We also believe it's essential that we're prepared for that unlikely event of a train incident."

"The fact of the matter is ... Bakken oil, we could never argue is not dangerous. It certainly is. So is ethanol, so is chlorine, so is ammonia — and these things have constantly been on the rail lines for the last 15 to 20 years," he said.

Meanwhile, work on the bridge at First and Oregon will reportedly begin in September — meaning that Rusty the Rail Bridge could very well soon be celebrating his 100th birthday.

Editor's Note: The radio version of this story aired before Canadian Pacific announced it would upgrade the bridge in downtown Milwaukee.