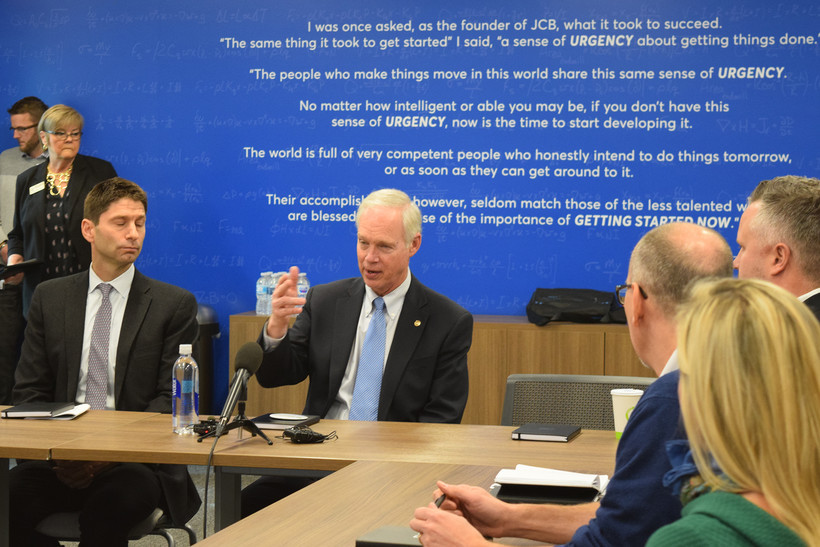 U.S. Sen. Ron Johnson met with business leaders representing Wisconsin’s manufacturing, hospitality and farming industries in Waukesha on Thursday to discuss the impact the Trump administration’s trade policies are having on their businesses.

The move led to the E.U., Mexico, Canada and China to retaliate with tariffs of their own.

Industry leaders told Johnson they supported what Trump had done in terms of lowering taxes and decreasing regulations that were impediments to business. Still, they questioned if global tariffs were the best tool to address trade problems with China, often pegged as the worst of bad actors in trade dealings by the president. They also wanted to know if there was an end in sight.

"I don’t know how it all ends," Johnson told them after an almost hour-long roundtable discussion. "All I can tell you is I do think the administration has a game plan, they got a negotiating strategy, they’re not going to reveal it to me or like, anybody, until we actually conclude it."

Johnson later told reporters the administration is listening to the concerns of business owners and is open to feedback.

But while the strategy plays out, many Wisconsin companies are hurting.

Ramirez and others said retaliatory tariffs were reducing their profit margins in the short-term and threatening their long-term competitiveness.

"Particularly to our competitors in Europe and Japan who can have identical supply chains to us but at a lower cost base because they don’t have to incorporate these tariffs into their economic equation," Ramirez said.

"Today, the prices change daily," Isbister said. "So not only are we dealing with volatile pricing, we’re also dealing with all the work it takes to every single day have to go out get new raw material pricing."

Jim Holte, president of the Wisconsin Farm Bureau, said he was optimistic about a new trade agreement with countries like Mexico and Canada but the deal needed to be signed.

"Those tariffs are still in place and they’re still impacting our agricultural products," said Holte.

A new report by Tariffs Hurt the Heartland, a grassroots campaign against tariffs backed by Farmers for Free Trade and Americans For Free Trade, finds Wisconsin businesses saw a 47 percent increase in tariff-related costs for the month of August compared to the same month last year.

More than 80 trade associations representing thousands of businesses and workers announced Wednesday they are forming a coalition called Americans for Free Trade and joining with agriculture groups to launch a multimillion-dollar campaign against tariffs.

Isbister left the meeting with Johnson disappointed over the fact she was left with no clear answers.

"(Johnson’s) body language suggested that if we can negotiate better trade agreements with key partners and deal with some of the abuses from some of our trading partners, that perhaps the tariffs would go away, so I’m going to hold on to that," she said.