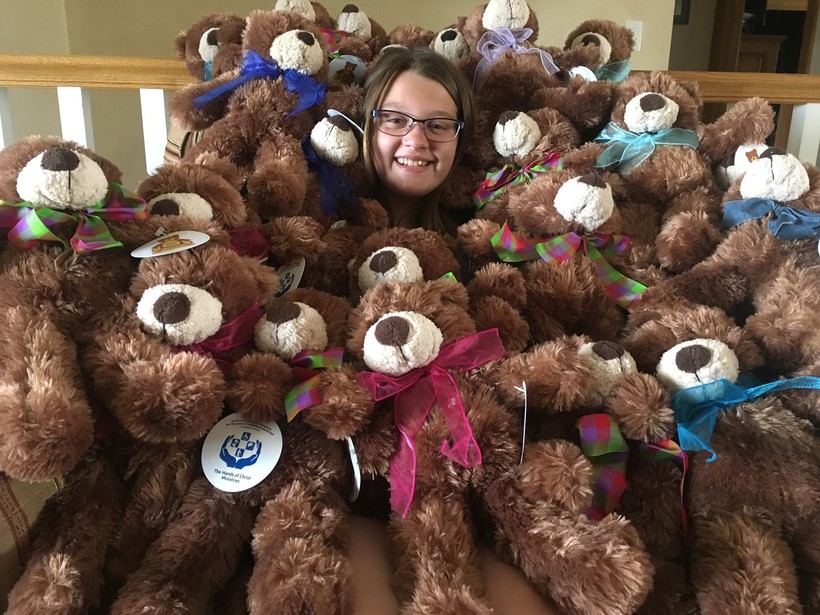 Lia Haile poses among a hoard of teddy bears donated by Phillip's Love Bears. Lia will include the bears in her "Welcome Home" bags that are given to children who stay at Hope House, a homeless shelter in Manitowoc. Photo courtesy of Tania Haile

One of the homeless shelter's young residents was celebrating his birthday, and jumped up and down after seeing the bags — he thought they were his birthday presents. Lia Haile has been organizing birthday parties at Hope House since she was in second grade. Photo courtesy of Tania Haile

"I just felt terrible," Lia, now 14, said after learning from the shelter's director that no resources were available to throw the boy a birthday party.

Lia, who was in second grade at the time, spoke with her parents and returned to the shelter the next day with a cake, balloons and a small gift. That celebration several years ago grew into a tradition for Lia, who organizes an average of one to two birthday parties and other celebrations a month for residents at the shelter.

Not wanting to give each child at the shelter a generic birthday, Lia made it a habit to talk to those about to celebrate a birthday ahead of time to identify their interests and tailor each party to them.

"I think it's important because a kid's birthday party is so centered around them, and that's their day where they get to have fun and be a kid and not worry about the situation that they're in," Lia said.

She's thrown parties with themes from Disney's "Frozen" to the animated series "PJ Masks." One of the homeless shelter's residents was a big fan of both wrestling and dinosaurs, so Lia combined the two for his special day.

Just as every party is different, so is each child, Lia's mom Tania Haile said.

"In Lia's mind, every child needs his or her day with his or her own special things," Haile said.

"When they blow the candle out, they get to make a wish," Haile said. "And (Lia) gets to be part of that."

Katie Koenig, lead case manager at Hope House, said while many of the adults living in the shelter work, that money typically goes toward finding a home, not to throwing birthday parties for their children.

"The children get to celebrate a birthday, which is something that all kids should get to do," Koenig said. "It also helps the parents 'give' their children a day of happiness when they might not otherwise get the opportunity to provide their kids something like this."

Koenig said the shelter's capacity is 24 people, and generally half of those residents are children. Currently, the shelter is housing six adults and nine children.

Lia learns of the birthdays from Koenig, who either has the dates on record or is asked by parents how they can provide presents and cake for their children.

"Usually there is a look of relief and happiness on their face," Koenig said of parents learning about Lia and her party service. For her efforts, Lia was named the 2016 Tom Drill/City of Manitowoc Volunteer of the Year, a title engraved on a slab on the Volunteer Walk of Fame that runs along the Manitowoc River.

Nationally, Lia has earned recognition from "People" magazine and Rachael Ray on her daytime show in April 2016.

Items for the parties are all donated, often by local organizations such as Copps Food Center and Party Pizzazz.

While Lia said she spends a lot of time organizing and creating lists to help keep track of her project, she also has more than 900 volunteers ready to help.

"She's got a great group of friends and organizations that support her," Haile said.

The volunteers are part of the Helpful Hearts Club, designed to get community members involved in the project, Lia said.

"My club would not be what it is without the members and their support and generosity. I definitely think that any volunteer or any person that does give back will say that they do feel very happy," she said. "It does make you feel really good and make you want to keep doing what you're doing."

In addition to birthday parties, she organizes an annual picnic as well as baby showers, holiday dinners, tailgating parties, and school supply and food drives.

She can't pinpoint how many parties she has thrown, but she estimates it's more than 100.

Lia said reactions from families differ, with many expressing gratitude for the themed parties. Others are more private about their appreciation, she said.

"The general reaction is they're very thankful and happy for the party that was provided for their kid," she said.