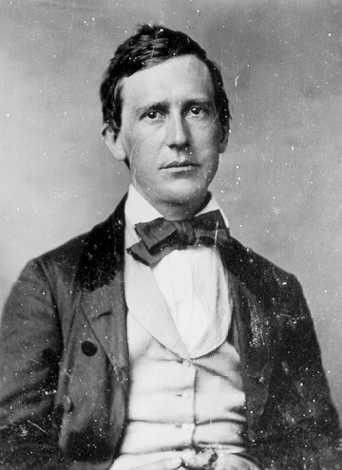 It was no ordinary singing club.  Its members paraded through the streets accompanied by fifty to a hundred bodyguards.  The extra muscle was necessary.  When rival clubs clashed, they did more than sing--they fought.

America was being pulled apart by sectionalism, and the 1856 presidential contest was a hot one.  Like the rest of America, Pittsburgh was swept up in politics, and its musicians were in the thick of the dispute between presidential contenders.  On August 6th, 1856, Stephen Foster jumped into the free-for-all by helping to form the Allegheny Buchanan Glee Club.  Foster was to select musicians and solicit subscriptions to the club’s concerts. But Foster would soon find out that singing would be the easiest part of what they did.

Returning to Pittsburgh after a rally in nearby East Liberty, the Allegheny Buchanan Glee Club stopped in Lawrenceville to serenade at a house of Buchanan sympathizers. Singer Billy Hamilton began a Foster tune and was quickly joined by a stranger in the crowd who was mangling the melody.  The annoyed Hamilton asked one of the bodyguards to persuade the man to limit himself to the choruses.  The bodyguard did so—by knocking the man to the ground, twice. The firemen headquartered across the street supported Buchanan’s rival.  They rushed into the serenade with fists flying.  Billy Hamilton described what happened next:

“Our peaceful body of serenaders was transformed into a howling mob.  Foster, his brother, myself, and other vocalists hastened out of the crowd.  We were all too small and had no business around where any fighting was going on.  None of us were hurt, and few of the members of the guard suffered, but the firemen were completely routed and driven back into their headquarters.  They had tackled the wrong crowd that time.”

For better or worse, music and politics were thoroughly intertwined. Stephen Foster’s, candidate managed to win that no-holds-barred election of 1856.