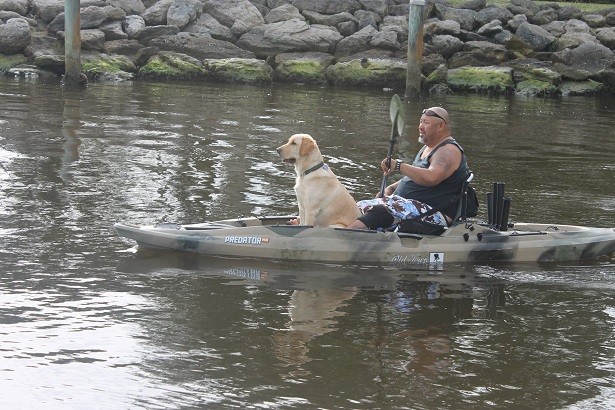 Wounded Warrior and Veteran Mick Lum and his service dog Rascal enjoy getting out on the water together. Image courtesy of Rutabaga Paddlesports.

Paddling With A Dog Fun For Both
By Judith Siers-Poisson
Share:

With the brutal winter Wisconsin has endured this year, it might be hard to imagine getting out on the state’s great rivers and lakes.

But hopefully, in not too long a time, paddling in Wisconsin waters will again be possible. And while it’s fun to paddle with human friends, it’s also great to get out on the water with a canine companion.

Darren Bush, chief paddling evangelist and owner of Rutabaga Paddlesports in Madison, said he’s a fan of taking dogs out on the water with him and is happy to help others do it safely so it’s fun for everyone.

A caller to "The Larry Meiller Show" who identified himself as Andrew in Mount Horeb said he’s always enjoyed kayaking with his small dog, but now that they have a large retriever, he’s wondering about a stand-up paddleboard.

“A stand-up paddleboard with (an) 85-pound dog is going to be problematic,” he cautioned.

But he did have one recommendation: a model from the Bote Co.

“They make a really nice board that’s mostly for fishing that has a lot of displacement and it tracks pretty straight,” he said. “So, that would probably work.”

A caller who identified herself as Lori from Watertown recently added a water-loving dog that weighs about 50 pounds to her household and was looking for a good combination kayak that would work for the two of them. Bush said for a dog that size, there are a lot of good options. Bush said that on the Rutabaga Facebook page there is a photo from just a few days ago that for a similar situation.

“There’s a picture of a veteran who came back from the war and has a therapy dog. There’s a boat called the Old Town Predator that has a big, flat area and it’s really good for him paddling along with his therapy dog. That’s a great one,” Bush said.

He added that the only downside is that it’s a little heavy, so it may take a second human to move it around. “But they are perfect for paddling with a dog,” he said.

Bush shared a photo of his paddling companion for many years, his black Labrador, Gracie. While she’s now longer with him, Bush said he loves that picture of her.

“I love that picture of her sitting in the boat, with her nose on the gunnel, watching everything go by,” he said.