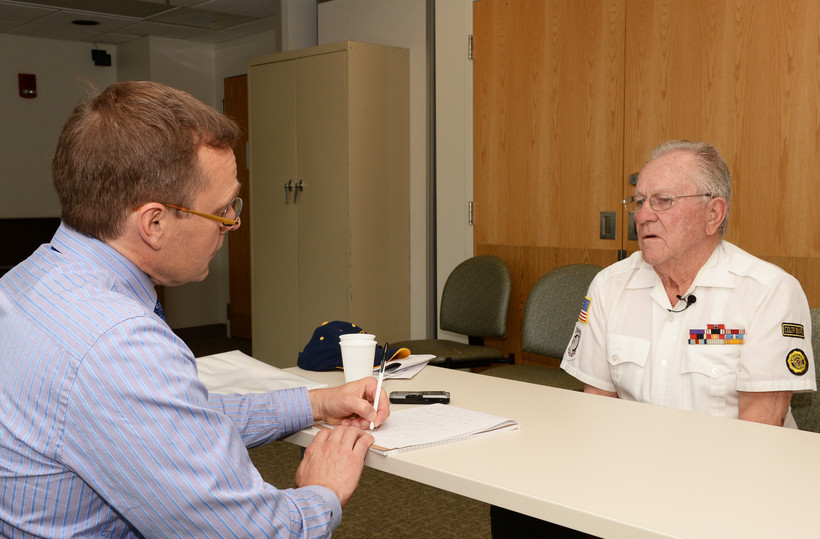 VA’s Thor Ringler interviews Army Veteran Darrell Krenz, a POW in the Korean War, for the “My Life, My Story" program.

On Jan. 17, 1945, Glenn, Ken and Bob Boyd spent 45 minutes together in Dacca, India. The brothers grew up in McFarland, Wisconsin, but through a combination of sheer luck and determination, they found themselves together during World War II on the other side of the world.

The story is something that Hollywood writers might dream up, but it has never been told as a best-selling book or blockbuster film. Instead, it was told on May 11, 2015, at the William S. Middleton Memorial Veterans Hospital in Madison, Wisconsin.

Glenn Boyd spoke with Thor Ringler, the director of the VA’s "My Life, My Story" project in Madison. Ringler oversees a federally funded program that collects these interviews and transcribes them into 1,000-word stories that become a part of that veteran’s medical record. More than 800 veterans have told their stories so far.

Ringler has personally collected more than 200 of those interviews. He said the power of these stories is beyond description.

"As an interviewer,” Ringler said, "you feel like you are back there at the time of these experiences. You are being brought back by the grace of this person to this time of their life. And it is a very special gift — not only to me, but to people who read this story in the future."

Ringler said that many of the veterans that he has interviewed have never been interviewed before or even talked about their experiences. Many veterans, he said, "don’t want to burden their families with the ordeal they went through." But in the context of the VA, the stories are the opposite of a burden. They serve as a bridge that can connect doctors with their patients and improve veteran care.

Finding Your Family, Halfway Around The World

The story of the Boyd brothers is particularly special, especially since many people now have devices in their pockets that allow us to instantaneously locate and communicate with the people we love. That simply wasn’t the case in the 1945.

"When I landed in Bombay I got a letter from my mother that said that my brother my Ken was in India flying C–47s," said Glenn Boyd. The next morning, he started off on a journey that was as improbabley as it was ultimately successful: finding his brother.

He got lucky simply by walking across the road and talking to a sergeant who knew his brother. After series of near-misses, he hitched a ride to where his brother’s airplane was located. Sure enough, there he was.

Glenn walked up and poked his head between his brother and the co-pilot.

"Believe me, it was unbelievable,” he said.

Even though Glenn was a cook, he joined on as a "kicker," the person who would drop supplies from the plane to the troops below. The job was so dangerous they only took volunteers, but he and his brother flew dozens of successful missions together.

And then, in October 1944, another letter came. Glenn and Ken’s older brother, Bob, was in India as well.

Thanks to help of a mailman and Ken’s commanding officer, the two men took an airplane and few 400 miles west to Dacca (now Dakha, Bangladesh) in January 1945.

"The way I explain it," Glenn said, "is that Dacca (90 degrees east) is on the opposite meridian of McFarland (89 degrees west). We we all three went halfway around the world and met there."

When asked to reflect on his time during the war, Glenn had this to say: "We were all kids back then. That’s why we did it, because nobody knew any better -- we were young. It’s just like what the young kids do today. They’re not crazy, they’re just young. Yeah, it was a great life -- out of the Depression and into the frying pan. But we made it."

According to Ringler, just the very act of telling this story seemed to make Glenn feel better.

"He definitely had a twinkle in his eye as he was telling the story," he said.

This is perhaps the real secret to the program’s success. It’s not just that the doctors will now be able to offer better care, it’s that someone has already provided a kind of care: the simple act of listening.