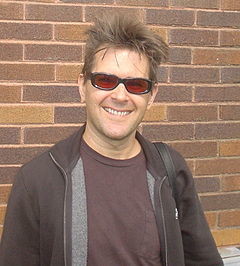 Frauenfelder Says Many People Looking To Get Their Hands Dirty In Computer Age
By Rob Ferrett
Share:

As the Maker Fair -- touted as a kind of "science fair" for adults -- concluded in Detroit last week, a leader of the “maker” movement said he sees a growing interest in tinkering, inventing and hacking.

Mark Frauenfelder, editor of Make Magazine and boingboing.com, said that Maker Faires like the one held in Detroit last weekend draw hundreds and even thousands of participants to share projects like robots, rockets, remote-control experiments, electronic projects and more.

“It’s like a giant-sized science fair that people of all ages participate in," Frauenfelder said.

Frauenfelder said he sees a growing in interest in these high-tech, do-it-yourself projects, as well as lower-tech pastimes, like backyard beekeeping, home brewing and crafts.

“So much of our lives are devoted to computers and screens and mobile devices and video games and things like that. People want to touch the real world and use their hands, to (view) the world as the ultimate hackable platform," he said.

One of Frauenfelder’s favorite personal success stories was a cigar-box guitar. To construct it, he used a cigar box as the instrument's body, an oakwood neck and toothpick frets.

“I put it together expecting it to sound horrible, and when I strung it up and tuned it and played it, I was shocked that it sounded half decent," he said.